Onward... to the other side of the planet!

I mostly post about our research on the polar soils of the southern hemisphere in Antarctica. However, I have just begun a journey to the opposite side of the planet, this time heading north above the Arctic Circle. Our group from Arizona State University will be spending the next couple of weeks at Kilpisjärvi Biological Station in northern Finland. 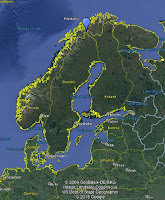 Kilpisjärvi is in the northwestern tip of Finland, near the point where Finland, Norway, and Sweden meet. At 69°N, it is north of the Arctic Circle, so at this time of year we'll be enjoying 24 hours of daylight and some chilly temperatures that give us a much-needed break from June in Phoenix, AZ! You can learn more about Kilpisjärvi on their website here.

Our team this year is interdisciplinary. We are two professors and 11 students. Half of us are scientists, and the other half are artists. The students on the project will be working in scientist+artist teams to conduct independent research projects in Arctic ecology, as well as communicate that research to the public through a creative work. So often science and art are thought of as entirely different fields, when in fact they share the same core set of skills: observation, interpretation, creativity, and communication. The stereotype of a scientist is someone analytical and boring, with no creativity or inspiration. But scientists can't design exciting new research without being creative! They need to be able to observe their surroundings from different viewpoints and think outside the box, just like an artist is trained to do. Artists also need to be analytical and take risks like scientists do, and shouldn't be deterred from getting involved and understanding science. So we hope that the students will leave the program as better scientists and better artists as a result of practicing both fields through their research projects. Plus, we'll introduce a cohort of students to the Arctic who have never been here before and convey what they learn to the public, through hands-on research experiences. Already they are coming up with some pretty cool ideas of what they'd like to work on!

Our trip begins in Helsinki, Finland. The two professors (Richard and I) arrived in Helsinki today. Tomorrow, the students join us. We'll spend a couple of days here meeting with the US Embassy, scientists and artists from the University of Helsinki, and visiting museums before flying up north to Kilpisjärvi on Saturday. Stay tuned!
Posted by Dr. Becky