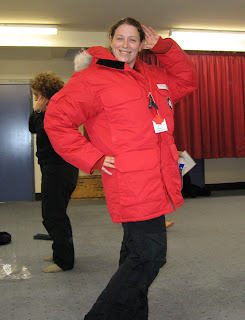 Today we were outfitted with all of the gear we need to wear while on Antarctica. The board in the top picture shows the variety of clothes they give us: everything from long underwear and socks to coats and hats. That's me to the left trying on all of the clothes I was given. Underneath that big red parka and the windpants, I am wearing 2 pairs of long underwear, fleece pants, a long undershirt, and a fleece jacket. I was very toasty warm!

Tomorrow we are scheduled to fly to Antarctica. Before leaving New Zealand, we stopped by the statue of Robert F. Scott, the explorer who traveled to Antarctica 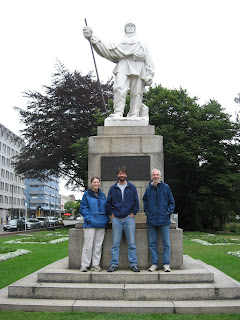 several times in the early 1900's and led the British team on the race to be the first people to reach the South Pole in 1912. The Norwegian team beat Scott to the South Pole by a month, and the entire British group of explorers died on the return journey. That ended Scott's very great and famous career as an explorer! The statue we visited was sculpted by Scott's wife and placed in Christchurch in his honor. Becky (me), Mike, and Ross are in the picture at the statue. On Antarctica, the New Zealand research station is named after him (Scott Base), and the hut built by his team for the expedition to the South Pole still stands.
Posted by Dr. Becky No comments: