Why is Bonney so Bonny?

The past couple of days, Mike and I have been doing field work out at Lake Bonney. The weather has been very sunny for the past couple of days, which has made our work much easier! Most of the work that we do, such as the elevation transects and nutrient additions, are done at more than one lake. This is because the different lakes in the dry valleys are each slightly different. They have different amounts of nutrients, different elevations, and other important soil properties, so they support different amounts of life. To understand the entire valley, we have to do our experiments at more than one lake. So, everything that we did last week at Lake Fryxell has to also be done here. Mike and I have walked two elevation transects. We also measured the respiration from soils under the nutrient addition experiments. Since I've already told you about those projects, I will show you some other neat things around the Bonney Basin.

First, we went out onto the lake ice so that some other people working there could show us what they're doing. They wanted to look at the bottom of the lake. This is pretty hard to do, since the lake is covered with ice year-round, and is 120 feet deep. They drilled a hole in the ice so that they can see into the water. They dropped a camera down through the hole on a very long cord so that they can see the bottom of the lake! The lake water is very clear and the sun shines all day during this time of year, so there are actually things living on the bottom of the lake! Algae, which are very small primitive plants, live in mats on the bottom. This is similar to the green slimy stuff you see around lakes in the U.S. I don't have any pictures to show of the lake bottom (because they just didn't turn out very well). But, here is a picture I took while standing on the middle of the lake in the late evening sun! 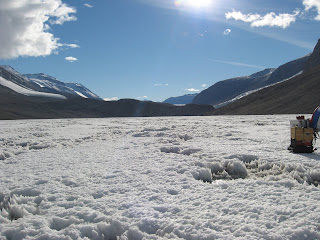 Another interesting area of the Bonney Basin is called Blood Falls. This is an area on the Taylor Glacier where a reddish liquid seeps out of the glacier, making it look like the glacier is bleeding. Many people have been working at Blood Falls to find out why this is happening! Scientists think that it is from sea water that was trapped in the glacier a long time ago. The sea water contains ancient red salts that are being released as the glacier is melting. 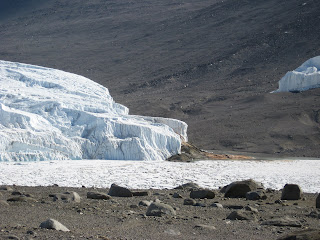 As I said before, the internet connection here is very slow. I have been able to upload some pictures, at least, but they may not be the greatest quality. I added pictures to my previous entry about soils, so that you can see what I meant by loose and rocky!

Mike and I will continue working out here for the next several days. Today, the weather became cloudy, and it is a bit colder. The work we wanted to do needs warmth. When it's warm, the soil biota are active and respire more. We want to measure respiration in different areas, but we can't do that if it's not warm! Hopefully the weather will turn warmer again tomorrow!
Posted by Dr. Becky No comments: