We've been in the field for a couple days now taking soil samples. One of the projects we've been working on is to study the effects of permafrost melt water seeps on soil chemistry. 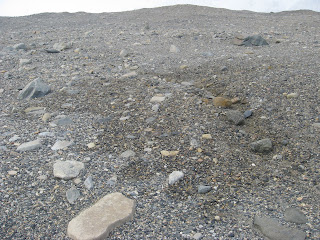 As that water moves up through the soil, there are a lot of ions, including nutrients, that get dissolved and move up through the soil with the water. We want to know how much nutrients are moving in the soil profile with that water and how much that changes soil nutrient cycling overall. To study that, we have to dig a lot of soil pits. That's what Jenn is doing in this photo. We dig pits both inside and outside the seep patches to see how their soil nutrients differ. 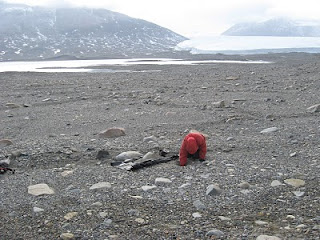 In the pits, we take soil samples from the wall of the pit along the depth of the soil profile. That way we can measure the ion concentrations in each layer. 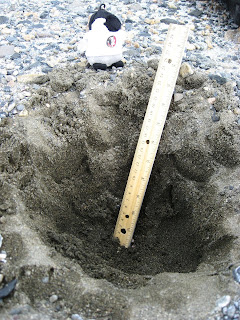 Last season was a particularly warm year, so there were a LOT o f permafrost seep patches all over the Fryxell basin. We dug many pits and found that nutrients were much more abundant in the seep patches than dry soil, especially at the top near the surface. With more ions and nutrients in them, the seep patches are a very different habitat for soil organisms than what would normally exist in dry soil. That is why we're interested in studying the seep patches. Nutrient cycles could change a lot when permafrost melts, because more nutrients become available and there's more water for organisms to use while they process the nutrients.

This year we're digging more pits and taking similar samples, but we're specifically interested in the sulfur cycle this time. We found that the ion sulfate (SO4) is very abundant in seep patches, but not at the very bottom of the soil pit near the melting permafrost. Other scientists have found that there are a lot of bacteria at the bottom of soil pits near the permafrost that use sulfate instead of oxygen to breathe. These are called "sulfate-reducing bacteria" and they live all over the world. We think that maybe permafrost melting releases a lot of sulfate, but near the bottom layer the sulfate is used up by the sulfate-reducing bacteria. Other scientists have also found that some of the bacteria in the dry valleys use a very old metabolic pathway for sulfate reduction, and we are looking to see if this metabolic pathway is being used by sulfate-reducing bacteria near the permafrost, and how much their activity can change the soil sulfur cycle when permafrost melts. It requires a lot of digging! So far we have sampled 7 soil pits.

Now we have moved camps, and we're now sitting on Lake Hoare. We will be doing some field work here, as well as enjoying the Christmas holiday with our friends from other science groups. It should be a good two days here on Lake Hoare!
Posted by Dr. Becky No comments: