There are more than just scientists living at McMurdo Station. In addition to the scientists, there is a large population of people that support staff that keep the base running. That includes the people that feed us, clean up after us, maintain the buildings, fly the helicopters, run the laboratories, and keep everyone on schedule. And so much more! During the busiest part of the season, there are up to 1,200 people living in McMurdo! With that many people, there is definitely a culture to the town, with all sorts of entertainment available.

There are several special events that happen each summer. One of them is an outdoor concert called "Ice Stock." Each year, make-shift bands get together and practice just for this event! These are people that are generally not normally musicians by trade. So, the bands are very interesting! 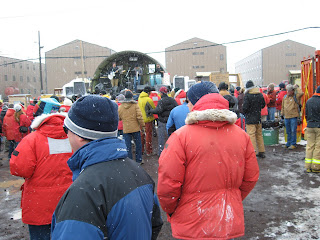 Another annual event is called MAAG (the MEC Alternative Art Gallery). This is run by one of 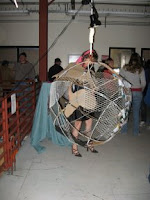 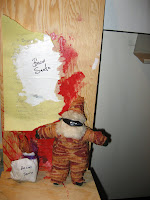 the departments (the MEC). They turn their building into an art gallery where artists in town can display their art. This is usually the home of very strange art, not normal types of art like paintings and drawings. The art is usually made out of spare items that can be found around McMurdo, such as Bacon Santa (made by someone that works in the Galley) and huge sculptures made from construction materials.

There are also several fun places in McMurdo that are regularly open. One of them is the bowling alley. At McMurdo, we have the only remaining manual bowling alley! Somebody stands at the back of the lane to return balls and replace the pins into their standing positions for the bowlers out at the other end of the hall. 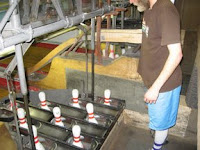 There is also a small weight room for exercise, a coffee house, a fast food burger joint (Burger Bar), and various craft rooms and classes. We're, of course, surrounded by beautiful nature, and you can hike, run, or ski along several trails near town. 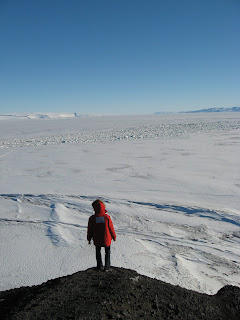 So, in McMurdo, there's never really time to get bored!
Posted by Dr. Becky No comments: