The chemistry of penguin poop

In the past, I have posted about working in the penguin rookeries. Most people associate penguins with ice and water, but Adélie penguins nest on land. Their nests can change the soil, because where penguins nest, they poop! You can see that poop (called guano) in the photo below. It is sort of pink-colored because of the krill that the penguins eat. 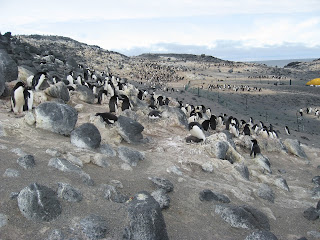 Bird guano contains a lot of phosphorus and nitrogen, so it adds a lot of important nutrients to the soil. Guano also has a lot of carbon, which all living things need for energy. It is very easy to see that some of the soil will be different, because some areas of the rookery have a lot of guano (and are very pink), and other areas do not. It's like fertilizing part of your garden, but not the whole thing, which would mean plants would grow better only in the part that's fertilized.

However, guano isn't a perfect fertilizer that makes the soil "better". It has a lot of nutrients, but too much nutrients can become toxic for soil organisms. Also, guano is very acidic, which is also hard for soil organisms to live in. Plus, the guano can dry into a very hard layer over the soil, which you can see in this video. Ross had to work hard to get the soil sample!

(You will also notice that a penguin rookery is a very noisy place to work! It's also smelly!) 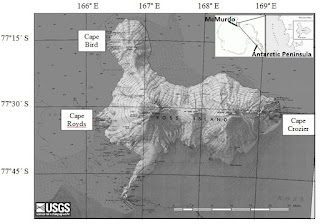 At each rookery, we studied soil that was either heavily influenced by the penguins by sampling right in their main nesting area (the pink spots). We also looked at soil that received less guano by sampling in lines from the nesting area all the way to soils outside the rookery area. The red lines in the photo below show some of our transects, going from the very pink (high activity nesting) areas into the gray soil where penguins walk but don't nest. We also sampled where I was standing, outside of the colony with no penguin guano. This way, we could find out how much penguin activity is needed to see a big change in the soil. 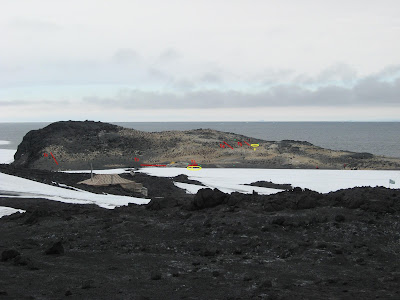 So what did we find? Soils with a lot of penguin guano (in the pink-colored nesting areas) had more carbon, nitrogen, and phosphorus than areas with low or no penguin activity. That's exactly what we would expect, since guano contains those nutrients! We also measured more respiration from the organisms living in the soil with a lot of guano. So, these nesting areas are "hotspots" where the extra nutrients allow soil organisms to be more active.

Even though guano adds a lot of carbon in the soil that wouldn't be there without the penguins, the microscopic soil organisms are still carbon-limited, meaning they have more nitrogen and phosphorus at their disposal than carbon. They're always looking for more carbon! We thought that the large amounts of guano would give them all the carbon they need, but it didn't!

We also learned that the size of the colony did not make a big difference for soil nutrients. It was a matter of penguin activity within the rookery, not the size of the colony that changed the soil the most. In other words, it didn't matter whether there were 2,000 or 120,000 mating pairs. If there was a penguin nesting area with a lot of guano, there were more nutrients and soil respiration.