We have had a busy few days working in the lab to process the samples we collected at Biscoe Point.

First, we spent a day at Palmer Station. We were supposed to only be there overnight to drop off passengers and cargo, but the wind picked up. We can’t use the cranes to offload cargo when it’s windy, so we had to wait overnight until the wind died down. That gave us the time to use the lab facilities at Palmer, which has more equipment than the LMG. It also meant we could visit with the people who live and work at Palmer, which was a lot of fun.

Then, the busy times in the lab began! There are several things we must do to each of our samples before we can freeze them to ship home. Freezing can kill the organisms that we want to study, so we have to remove them before-hand. Plus, some of the chemistry we analyze is better on fresh soil, rather than frozen. We have to do all of these things relatively quickly, so that we can freeze the soil within a couple of days of collecting it. Otherwise, the organisms and chemistry in the sample can change and ruin the sample. To do all of these things in 1-2 days, all five of us were busy working together to make sure it all gets done. 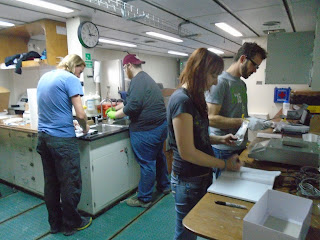 It would take a long time to tell you about all of the analyses we do in the lab before freezing it, so I’ll tell you now about one of them. (I’ll explain other things later.) One of the first things we do is extract the arthropods from the soil. The arthropods we find include insects and other very tiny things like collembola (commonly known as springtails) and mites. These arthropods like being cool and moist, so to get them out of the soil, we use heat. In nature, when the sun shines on the soil, the top layer gets hot and dry. The arthropods don’t like that, so they move lower in the soil to where it’s still cool and moist. We use the same principle in the lab. We put the soil or plant sample on a metal funnel and shine a light bulb over it. That acts like the sun to make the soil hotter and dryer. The arthropods move lower like they would in the soil, except instead of more soil like in nature, there’s a funnel! They drop all the way out the bottom and through the funnel into a collecting jar. You might remember the photos I showed you of the extractors I built to do this. Here’s that extractor in use with our samples from Biscoe Point: 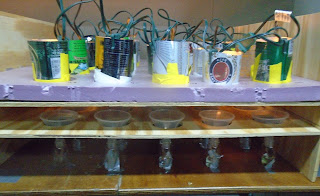 After a couple days of sitting under the heat of the light bulb, we remove the samples and preserve the arthropods in the vial. Because they’re so tiny, it’s hard to see them without a microscope, and it’s very hard to use a microscope on a moving boat! So I can’t show you good pictures of what we’ve found, but here’s a close-up of what was collected in one vial. We can see that there are a few different species of collembola in there, and a midge (a type of fly). 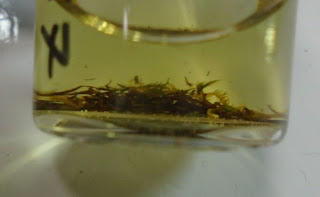 Tonight, we arrive at Signy Island which will be our second sampling site. Signy is at the top of the Peninsula, and we’ll be slowly working our way back down to Palmer. Tomorrow we should have another busy day collecting samples, followed by busy days processing them in the lab.