Friday evening I returned to McMurdo Station from Cape Royds. In Antarctic lingo, we call that going back to "Mactown." There, I met up with two more of my group members that have just arrived in Antarctica. Here we are, all three together! 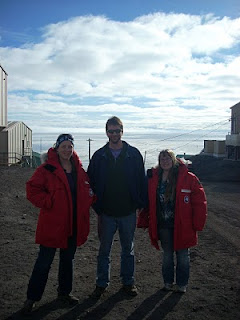 We will be a three-member team until early January, when Ross (our fourth member) arrives.

During my two days in town, I've been processing the samples I collected from F6 and Cape Royds. One of the things I have to do is clean the soil off of the moss I've been collecting, so that I can measure the nutrient content of the moss back in the U.S. To do this, I have to place the moss in a dish under the microscope: 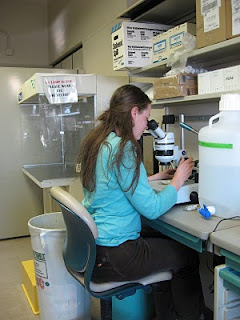 I showed you before what patches of moss look like in the field. It looks like a piece of carpet, and it's hard to tell the individual plant stems apart. 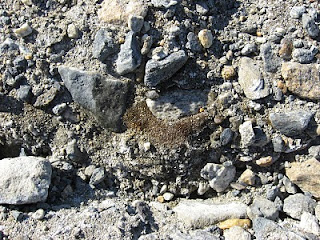 This is what a piece of that patch looks like through the microscope lens: 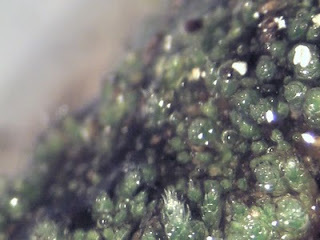 The green parts you see are just a small part of the moss. Those are the leaves, which grow on a stem. Below all of those green tops are a large mass of brown rhizoids, that work like roots for keeping the moss in place and collecting nutrients. 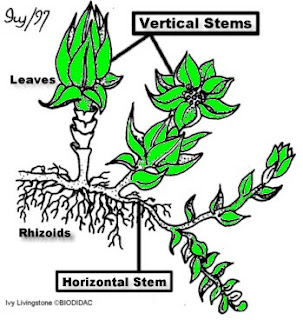 In this picture, the stems are bigger than the rhizoids, but in the moss I work with, there's a lot more rhizoids than stems. There's a lot of soil stuck in that tangle of rhizoids, and I have to wash all of that out. If I don't, when I take my nutrient measurements, I won't be able to tell the difference between what nutrients are in the moss versus the soil. It's very time-consuming, and requires a lot of patience!

Once the moss is clean, I put it in an oven (at a low temperature) to dry it out so that I can safely ship it back to the U.S. for analysis.

This is just one of the chores I've been doing since I've been in Mactown. It's been busy, because tomorrow I head back to F6 on Lake Fryxell for more field work!