Well, Elizabeth and I have had a very exciting past few days! A lot has been going on, both with field work and around McMurdo.

We've taken several trips to new places in the field!

Earlier in the week, we traveled to Lake Hoare. This lake is also in the Taylor Valley, between Lake Fryxell and Lake Bonney, where we've been spending most of our time. We wanted to see if any cool moss forests were growing around Lake Hoare. Elizabeth was very happy, because she found some! We also measured soil respiration for the full 24 hours that we were there. This way, we know exactly how active the critters living in the soil are at different periods of the day. Staying at Lake Hoare also means that we get to hang out out with the camp manager, Rae. She lives at Lake Hoare all season to make sure that everything runs smoothly in the Valley for the scientists. She also is a great cook and very good at Boggle!

I also traveled around to upgrade all of our "met" stations. These are electronic equipment that live in certain locations all year to measure soil properties at regular time intervals. The little boxes have probes that go into the soil to measure moisture and temperature, which are useful pieces of information when we interpret the data we collect each field season. This type of information is called "metadata" (hence the name "met" stations). Once a year, we go around to these stations to download the data they've recorded all year, and replace the batteries. This is what I like to call the "Metstravaganza!" I serviced these stations with my friend Hassan at many places I've already been, but also at one new location: Beacon Valley. Beacon Valley is farther inland than Taylor Valley, and looks quite different. The soils are very red and volcanic, and there are no streams or lakes running through it. It felt like I was landing on Mars! Since it's farther inland, it's also colder. It was very sunny, but still -10 degrees Celsius. 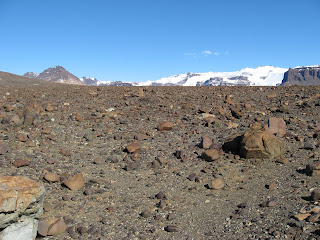 Today, we went to Marshall Valley, which is farther southwest of where we usually work. We were looking for mosses, since we didn't know if any grew there. We walked for hours without finding any, but we found a small patch just before the helo came to pick us up and take us home! But, it was a beautiful walk, even if we didn't find many mosses. It had just snowed there, so the valley was covered with a beautiful dusting of snow. 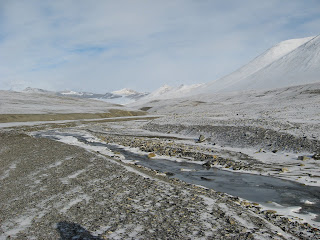 We've been flying a lot this week for our various day trips. We've flown a lot with a great pilot named Dustin, who has been explaining to us everything we want to know about the physics of flying a helicopter and how to navigate. We were given this website to help practice our flight skills. You can practice, too!

In town, there's also a lot of excitement. The various big ships are starting to arrive to bring supplies and fuel to McMurdo. The coolest ship is the Gianella, which is the supply ship that brings all of the fuel McMurdo will need for the next year. The Gianella has the coolest two Captains, Bob and Rob, who took us on a tour of their boat. We got to see the 5-story engine room that gives the Gianella her 15,000 horse power. We also walked the 608-foot deck. Here's a picture of Elizabeth and I at the stern, looking out over the Ross Sea (taken by Capt. Rob himself!): 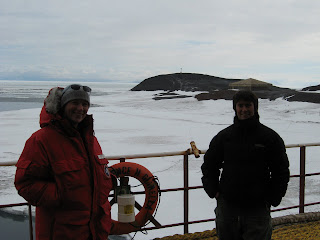 There was also a research vessel in town: the Nathaniel B. Palmer (nicknamed Natty P). This is a boat that travels to Antarctica each year, so that marine biologists aboard can conduct scientific studies along the way. The boat has a lot of equipment that monitors all sorts of water properties, which the scientists can read from the TV's in their bedrooms. Here's a picture of Elizabeth sitting proudly in the captain's chair on the bridge of the Palmer: 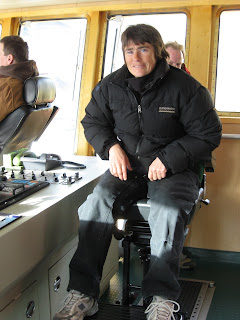 We also toured the Waste Water Treatment Plant at McMurdo (because we were curious!). We got to see how all of the water produced by people living at McMurdo is treated. All sewage comes into this building, where microbes consume the waste material to eliminate the carbon and nitrogen. They purify the water as much as possible. The purified water is then separated from any remaining "sludge". The clean water is pumped back into the Ross Sea, while the sludge is collected, compressed, boxed up and shipped back to the US for disposal. I don't have any pictures of the waste water plant, but it was certainly interesting!

Elizabeth and I are coming to the end of our stay in Antarctica. Today's trip to Marshall was our last flight out to the Dry Valleys. The next several days will be spent cleaning up the lab, packing up our samples to send back to Dartmouth, returning our gear (and probably playing a little bit with the helicopter simulator...).
Posted by Dr. Becky No comments: