I have arrived at McMurdo Station, Antarctica!

Today, I woke up early in Christchurch, packed my bags and headed to the airport. There, I boarded a U.S. Air Force C-17 and flew from New Zealand to Antarctica. It's about a 5-hour flight. There was a big crowd on the plane this year: about 60 people. Only half of us were American. We flew down with a lot of Italian and French scientists who headed to their own bases after they arrived at McMurdo. 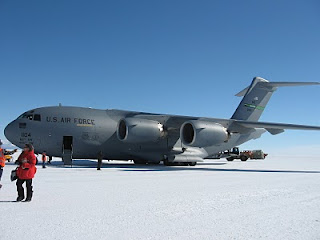 The runway that we landed on is built on the seasonal sea ice, so it is called the "ice runway". It's rebuilt each year and used until early or mid-December when the ice starts to break up. In my previous years, I've always arrived after the ice runway has been closed, and have landed instead at Pegasus Airfield, located further back on the permanent ice shelf. So, it was a different landing for me this year! The ice runway is much closer to McMurdo Station, so the journey from the plane to the station was much shorter than I'm used to. You can even see the ice runway clearly from our lab window: 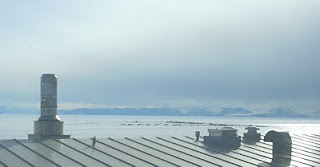 Tonight I'll be getting settled into my room and lab. Tomorrow, I begin the preparations for getting out into the field to get my work done. It'll be good to revisit all of the people that help me do that!
Posted by Dr. Becky No comments: