Today is the 167th anniversary of the first sighting of Mount Erebus.

Mt. Erebus is the volcano located on Ross Island (where McMurdo is located). It is the southermost active volcano in the world! It was named after the Erebus, one of the ships sailed by early explorers to Antarctica, who first saw the volcano on January 27, 1841. 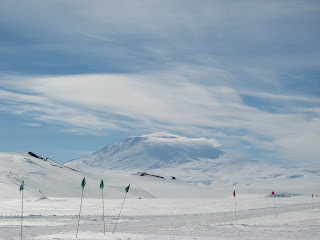 During the 1800's, polar exploration was in full tilt. Many of the places and features on Antarctica are named after early explorers or their ships. For example, McMurdo is named after Lt. McMurdo, who sailed under James Ross on the Erebus and Terror when this area of Antarctica (now called Ross Island) was discovered. This period of time is referred to as the Heroic Age of Exploration. It was a time when polar exploration was just beginning to grow popular, and many men and ships set out to learn about both the Arctic and Antarctic. They were often in search of new shipping routes and mapping that would make their country more money, as well as in the search of more knowledge about science and geography.

Polar exploration was, in many ways, very similar in the 1800's as it is today. Both these early explorers and modern scientists travel on military vessels to reach Antarctica. The early explorers traveled from northern Europe on Naval ships. England, especially, had greatly built up its Navy to defeat other European countries in wars at sea. By the mid-1800's, when England had won the battles, the Navy was huge and powerful with nothing to do. So most early explorers traveled to the Arctic and Antarctic on military vessels, manned by the Navy. Today, we still travel to Antarctica with the military. 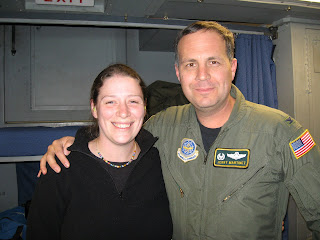 The US Air Force flies us from New Zealand to McMurdo, and our supplies are brought by the Navy. This year, the Naval battallion bringing our supplies are from Williamsburg, VA near my hometown!

Luckily for us, travel has become faster and much safer. Scientists are able to come down for short periods of time, lasting just a month to a year or more. In the 1800's, sailors signed on to polar expeditions that were several years long, and they were never exactly sure when they'd return. Today, we also have GPS's, radar, and satellite, and we know how to avoid bad weather! During early polar expeditions, sailors would sometimes become shipwrecked, and be marooned in the Arctic for years! Sometimes the ships would get stuck when the sea froze in winter, and have to live on the ship for a year before it melted again the following summer, allowing them to continue their journey. 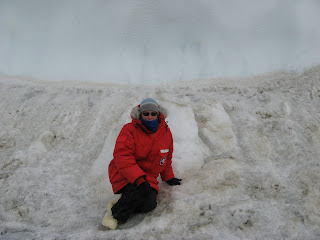 Early explorers did not have this technology. They wore a lot of heavy animal skins, worn loosely to prevent sweating. Frostbite was much more of a problem with early exploration than it is now! 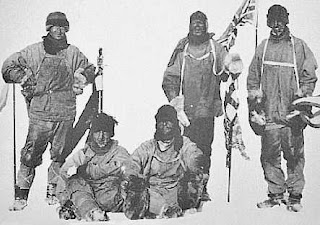 [photo credit: solarnavigator]
Early explorers built wooden huts for shelter and to house supplies. Huts were built at various points around Antarctica in preparation for an expedition that would travel between the huts. These huts still stand today, since there are not many microbes here that are able to decompose the wood. This is one of Scott's huts that still stands near McMurdo Station: 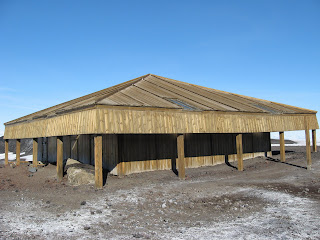 Today, we have permanent, modern facilities with electricity, internet, heat, and even plumbing in the ones at McMurdo.

Working on Antarctica has definitely become much easier. Now, we have trucks, helicopters, and piston bullies to move us around Antarctica. In the early days of exploration, gear was carried on land by sledge. Sometimes these sleds were pulled by dogs or ponies, but often animals were not available and sledges were pulled by the explorers themselves. This is called man-hauling. Sledges were loaded with supplies from the ship, at a ratio of 260 pounds per man hauling the sledge. Can you imagine pulling sleds that weigh almost a ton through deep snow through howling winds in the winter when there's no sunlight and temperatures hover around -40 degrees?! It was slow and hard work, and particularly frustrating on ice sheets. If a crew of men hauled a sled forward 11 miles in a day, they could still end up having gone backwards 35 miles because the ice sheet was floating away from the destination.

[Photo credit: Classroom Antarctica]
Unfortunately, many of the early explorers did not learn much from the native peoples they met in the Arctic. They made a lot of foolish mistakes that lead to a lot of deaths. For example, they often would refuse to eat the fresh meat available in polar regions (e.g. seals) that Inuit people would eat. Instead, they ate canned meat from Europe. Canned meat was, at that time, newly invented, and production was not very good. Canned meat contained very little nutrients (it had been boiled out of the meat) and were tainted with lead and botulism. They also considered the Inuit people lazy, as they did not move quickly. However, the Inuits knew that if they moved fast enough to break into a sweat, the dampness would cause them to become cold and possibly hypothermic. Many early explorers considered the Inuit lifestyle barbaric, and would not learn from how the Inuit people had learned to survive. The explorers that were most successful were those used to cold climates (such as Amundsen from Norway) and willing to adapt to Inuit styles of clothing and eating.

Many explorers were foolish, and did not make arrangements for rescue, should something go wrong. After discovering Ross Island and Mt. Erebus with James Ross, the two ships Erebus and Terror were sailed to the Arctic under John Franklin in search of the Northwest Passage. They traveled with almost 200 men on board, only two of which had any experience in polar exploration. The ships were wrecked, forcing the men to abandon the ships and travel on land. The crew had to man-haul the supplies across land. Rather than bringing only the necessities, they attempted to bring EVERYTHING from the ship, including the fine china and pottery, which was absolutely useless when trying to survive. There were too many men to be helped by the Inuits, because there is not enough food to feed 200 people at one time. Since no one in England knew where they were, the many ships that went to rescue them could not find them. The men all died after years of suffering in the Arctic. No lessons were learned, and the same foolishness occurred in when Sir Robert Falcon Scott attempted to reach the South Pole on Antarctica. They still had not learned, even from the great experiences of previous sailors, how to properly work in extreme cold. All men in Scott's party died on the way back to their ship from the South Pole.

Though many mistakes were made, there were a great number of wonderful discoveries made through Antarctic exploration. Early explorers were greeted by the same beautiful sights that greet modern Scientists: monstrous glaciers, volcanoes, huge rugged mountains and valleys, and unimaginably large expanses of ice. 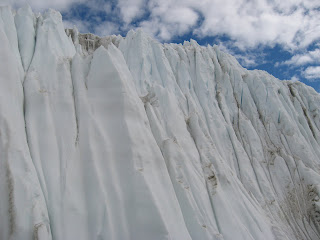 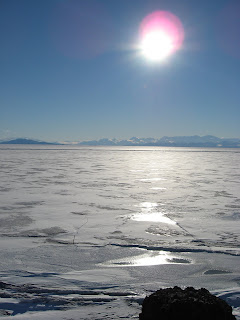 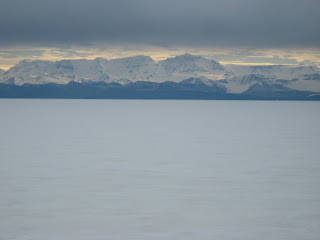