Antarctica has a rich history of exploration. Since the 1800's, explorers have been traveling to Antarctica in search of adventure, scientific discovery, and fame. When we were at Cape Royd's, we were able to visit one of the huts built during that period. 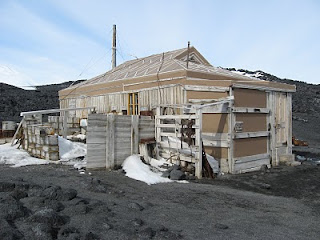 The hut was built for an expedition led by Ernest Shackleton in 1908. Shackleton and his crew traveled to the McMurdo area on what is called the Nimrod Expedition. A lot was accomplished on this expedition. Some members of the crew were the first to climb Mr. Erebus, the southern-most active volcano that is located on Ross Island. Others reached the south magnetic pole (which is not the same as the geographic pole). However, their main objective was the reach the geographic south pole. Four team members, including Shackleton, set off from Cape Royds and forged a new trail towards the pole in the spring of 1908. Almost a year later, in January 1909, they were within 97 miles of the pole. At that point, they realized that they did not have enough supplies to reach the pole and still be able to return to the hut alive, so they turned around, never making it to the pole. It must've been such a hard decision for Shackleton... to turn back and not reach his goal, even after enduring so much hardship for that goal, in order to ensure that his entire party survived. Still, they had reached a point farther south than anyone else had at that point, which was definitely an accomplishment.

The hut from this expedition still stands today, 100 years later. This was their shelter as they prepared for their journeys- their home-base. The hut was not luxurious! It is small, and basically one large room. A few dividing walls inside the hut were made out of food and fodder supply boxes. In addition to sleeping quarters, the hut housed a biology lab, dark room, printing press, kitchen, library, scientific and surveying equipment, and an acetylene gas generator so that they could have lights! 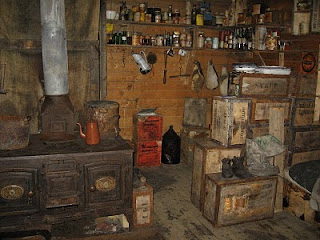 That big, cast iron stove is how they heated the hut, cooked their meals, baked their bread, and melted ice for water. On the shelves, you can see the remains of their food stores: things like tinned meat, dehydrated vegetables, bottled soup, cabin bread. Not too different from the kind of things we eat in the field now!

Shackleton had his own canvas-lined room, but the other 14 men shared the rest of the space. They lived in two-bed cubicles divided by canvas and slept on home-made beds from spare parts around camp. 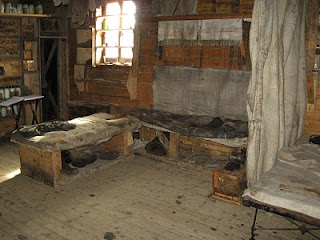 It's definitely amazing what these early explorers could do! They persevered through harsh conditions with much fewer resources than we have available to us today. They were able to accomplish amazing things for science through their efforts. It really puts into perspective how relatively easy it is for us to come down and do our research using airplanes, helicopters, trucks, solar energy, and polartec fleece!

This is our last day on the ice! We have packed up the lab, shipped our samples, and tomorrow we should be flying back to Christchurch! The season has gone by very quickly, but it has been a successful and productive one.