Mike and I flew across the lake yesterday. From the helicopter, we got a great view of one of the glaciers that comes into the valley! Glaciers are huge expanses of ice made from layers of snow. When more snow falls onto the top, the bottom layers of snow are smooshed into very thick ice. So the result is a big, thick hunk of ice on top of the ground. Glaciers move like very slow rivers and scrape the land below them. Over very long periods of time, they can carve out hills and lakes. Over 10,000 years ago, a lot more of Earth was covered in glaciers, because it was colder. The Great Lakes were formed by glaciers from the last ice age. Glaciers still cover a lot of land in the colder regions of Earth today, such as Antarctica. Chunks of them sometimes fall off into the ocean, making icebergs.

The glacier in the picture is Commonwealth Glacier. 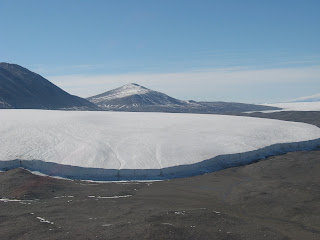 Glaciers grow when it snows and rains on them. They also melt, letting out water for streams and lakes. You can see a small stream coming off towards the left in front of the Commonwealth Glacier. If a glacier melts fast, a lot of water is released. When a glacier is "retreating", that means it is melting faster than it's growing. The glacier is getting smaller, which means more land is uncovered. If you're standing on the ground, it looks like the glacier is backing up. However, that's not actually the case. It's just shrinking! Glaciers shrink very slowly, maybe an inch or so per year. But, glaciers are huge. Two inches off the entire edge of a huge glacier is still a lot of water being released!

Many scientists are concerned that, as the planet warms, glaciers will melt faster. This will release too much water into the oceans, causing ocean levels to rise. There are a lot of cities on the coasts of every country. If the water rises too much, they will be flooded! At a museum in New Zealand, I learned that the predicted change in ocean level would flood Christchurch. Only the steeple of the cathedral in their city would be above water! Melting glaciers is just one of the many reasons that people are trying to stop global warming. 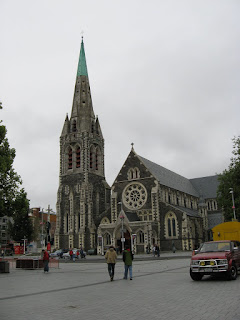 On another note, check out the new arrival! My "nephew" Henry was born in Georgia while I was in New Zealand. He is almost two weeks old now. I can't wait to meet him! 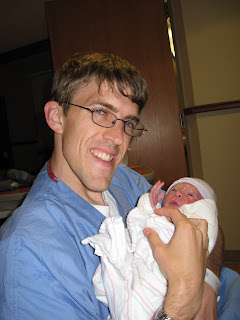