Back in New Zealand

I spent the past two days in McMurdo waiting to fly home. Luckily I didn't have to spend those days in Mactown alone! Brendan and Lily came back into Mactown, as well. Brendan was fixing his infrared camera. This camera is different from a regular camera because it takes pictures of heat, in the form of infrared energy. Surfaces that are warmer emit more infrared energy and show up white. Cooler areas emitting less infrared energy are dark. We took a picture of my face with the camera. You can see that my nose and cheeks are colder than the rest of my face. That makes sense, since I'm in Antarctica!
Brendan of course won't be using his infrared camera on faces. He will be using this on the the terrain in the dry valleys to help find water tracks. The infrared camera will show where the ground is warmer than the surrounding areas. That will help us visualize where there is likely to be liquid water in a water track without being able to see the water itself from the surface. 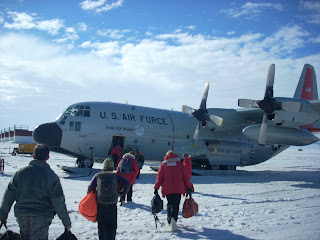 Then, today, I finally made it back to New Zealand! After being delayed by two days, we were finally able to take off. The runway that we normally use for the Airbus and C-17's has been closed until February, because it was melting. (A storm had blown a lot of black soil onto the runway, which caused it to melt faster in the unseasonably warm temperatures.) Instead, we had to fly in a different type of airplane that has skis: a LC-130. However, the skiway for these planes was not designed for planes so heavy as a LC-130 carrying passengers and enough fuel to get all the way to Christchurch. They're normally used for travel within the continent of Antarctica, not for going to New Zealand. So, we had to wait a few days while they did work on the runway to make it ready. They finally did it! Here's our group of passengers loading onto the plane. Most of us had been trying for several days to leave, so we were nervous the entire time that they would cancel us. Once we finally were in the air, everyone on the plane applauded! Now we're in New Zealand, but our journey has come to another halt. There are no seats available on the airline to get us home to the U.S.! So now we are once again sitting and waiting. At least we're one big step closer to home!
Posted by Dr. Becky No comments: