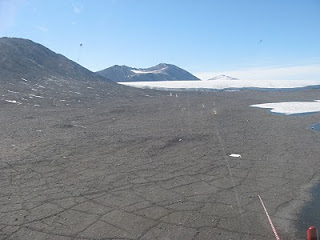 These polygons in the soil are very large. They can be many meters across. To give you a sense of scale, here's an aerial shot from a helicopter of F6 camp where I'm staying right now. You can see the polygons in comparison to the hut. 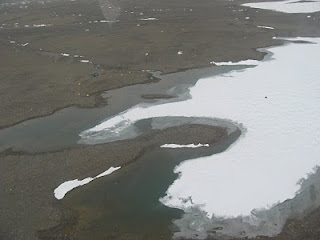 And here's what they look like from the ground. There's still soil the cracks. The cracks are not gaping holes that you can fall into. They are just crevices filled with finer-grained sand than the rest of the soil. 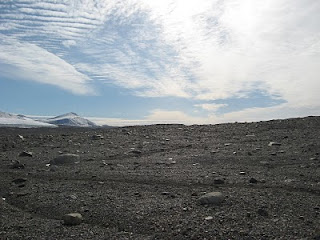 The cracks are created by the freezing and thawing of the ground ice below the soil. Water in the soil expands when it freezes and shrinks when it thaws, which creates the crack, and the finer-grained soil falls into the crack. Because ice and freezing plays a role in the formation of the cracks, they are called "cryogenic cracks".

Our research in the dry valleys has shown that biodiversity is lowest in the cryogenic cracks. So, when we walk across the soil, we specifically walk in the cryogenic cracks so that we are only harming the least diverse part of the community. As you can tell from the first photo, that means we don't walk in many straight lines!

Cryogenic cracks are not unique to the dry valleys of Antarctica. They are commonly found in cold places where permafrost underlies the soil, such as the Arctic tundra. They're even found on Mars, which is one piece of evidence that leads scientists to believe that there may be water on Mars.
Posted by Dr. Becky No comments: