Today we were outfitted with all of the gear we need to wear while in Antarctica. The board in the top picture shows the variety of clothes they give us: everything from long underwear and socks to coats and hats. We have to try on all of the clothes we're issues to make sure everything fits. I practiced my "ninja look" with the polypropylene base layer we're given. We also have to make sure that all of the layers fit overtop one another comfortably. Underneath that big red parka and the windpants, I am wearing 2 pairs of long underwear, fleece pants, a long undershirt, and a fleece jacket. I was very toasty warm! 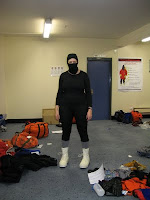 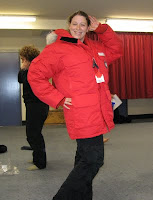 Our flight to McMurdo will be tomorrow at 9 AM (New Zealand time). That means we have some extra time to spend around Christchurch. My favorite place to go in is the Botanical Garden. It's summer here, so all of the flowers are in bloom. It smells wonderful, and it's so nice to enjoy the sunshine and greenery before heading to Antarctica. 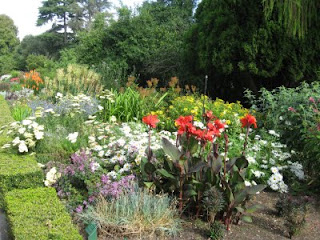 Jenn and I also went to the Canterbury Museum, where we learned a lot about the history of New Zealand and its people. New Zealand was originally colonized about 800-900 years ago by Polynesians. So, the ancestors of native New Zealanders are related to the people of Hawaii and other Polynesian islands in the South Pacific. These early people lived in New Zealand (or Aotearoa, as they called it) by hunting a bird called a moa. These are large, flightless birds that only ever lived in New Zealand, but are now extinct because they were overhunted by the early people! These early moa-hunting people of New Zealand are called the Maori. They have a very unique culture with their own language, art, and traditions. They hunted the moa until they were driven to extinction, at which point they relied more on farming and fishing. They were great craftsman that made beautiful wood carvings and ornaments made from jade and Paua shells. Their lives of course changed a great deal when New Zealand was colonized by Europeans, mainly the British, about 250 years ago. This is very similar to the U.S., where the Native Americans practiced their own culture until it was interrupted by European colonists. But, many aspects of Maori culture still remain in New Zealand. Maori is still one of the official languages of New Zealand, and even New Zealanders of European descent know many phrases in Maori, and you find Maori translations of most information given on signs and notices. Some of their cultural legacies in New Zealand include the haka dance (a war dance with a lot of shouting), and their art is still very much a part of New Zealand culture.

Well, if all goes according to plan, we will leave for McMurdo tomorrow morning and my next blog post will be from Antarctica! All but one piece of our luggage has arrived. Hopefully the final piece will come today so that we land in McMurdo fully-prepared for the next two months!