Yesterday, all four of us went to Cape Royds where there is an Adelie penguin rookery. 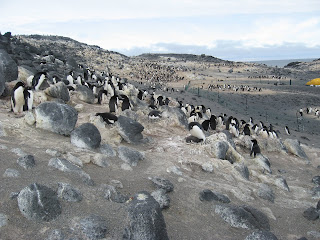 Adelie (pronounced uh-dell-ee) penguins are one of two species of penguin that are found in this area. (The other species is the Emperor penguin.) Adelies are fairly small penguins. You could easily fit one in your school backpack. They are easy to identify by the white ring around their eye. Adelies mate and nest in rookeries like this one on the rocky capes of Ross Island, which is made out of volcanic basalt. Adelies make their nests on the ground by creating a hollowed-out bowl and carrying lots of small rocks into it. Right now, the Adelies still have some chicks that they're taking care of. You can see one huddled underneath its parent in a nest in this photo, just to the right of center. Adelies nest on land, but they spend the rest of their time out on the sea ice, because they eat krill in the ocean. So, the open ocean isn't very far from this rookery. I'm standing very close to the edge of the cliff to take this picture, and the ocean wraps all the way around the peninsula. You can see it on the horizon at the other end of the rookery. Because they eat from the ocean, their guano smells very fishy. It is a smelly place to be!

We are interested in the soil at penguin rookeries because penguin guano is very high in nitrogen and phosphorus. Nitrogen and phosphorus are two key elements that we focus on in the dry valleys with many of our experiments (like the stoichiometry experiment where we add the solutions containing N and P). The soils at penguin rookeries are naturally very high in N and P because of all the penguin poo, which makes it a nice comparison to have for our experiment. I am interested in knowing how soil organisms and nutrient cycling respond to such high levels of N and P in Antarctica, so penguin rookeries are the place to find out!

We sampled soils from four different types of locations at the Cape Royds rookery. We sampled from soils in a nesting area (the areas that are really orangey pink from all of the penguin guano), areas outside nesting grounds but still highly trafficked by penguins (the gray areas in the photo), areas with very low penguin activity (just the occasional passer-through), and areas not trafficked by penguins at all. We took soil samples from these different locations, and we'll measure their chemistry and microbial community. The soil here is really hard and compacted from all of the penguin foot traffic. In this video, you can see how hard Ross has to dig to get a soil sample. Jenn was helping take samples by opening bags for Ross, and Julia was in charge of labeling. Meanwhile, I was documenting every sample location with my camera and by drawing maps, so that we would know exactly where every sample came from.


In addition to taking soil samples to measure chemistry, I also measured CO2 flux to estimate the amount of respiration coming from the soil organisms. Because there's so much more nitrogen and phosphorus, the respiration rates were about ten times higher here than they are in the dry valleys! 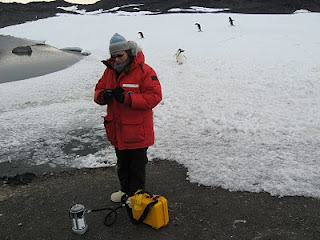 I also took a lot of extra soil from these areas so that I can set up a miniature stoichiometry experiment in the laboratory and do similar fertilizations as the ones we're doing in the field. So now our lab refrigerator is full of stinky penguin soils that will be shipped back to Dartmouth!
I hope to visit two other penguin rookeries that are on Ross Island: Cape Bird and Cape Crozier. You can see on this map where they are in respect to McMurdo and Cape Royds. (The dry valleys are on the mainland about 70 miles to the west.) 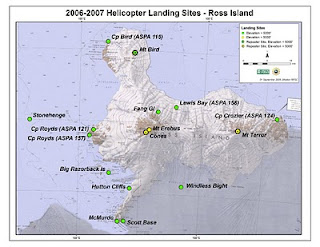 Hopefully I will be able to tell you more about other penguin rookeries in the coming weeks!
Posted by Dr. Becky 3 comments: