Today we got to go on a hike with Antero, who is the director of the research station. He has been working here for over 45 years, since he was a graduate student working on his PhD, so we learned a lot of information from him!

Kilpisjärvi is in the northwestern "arm" of Finland, sandwiched between Norway and Sweden. Borders with both countries are very close. To get to the hike, we had to cross into Norway. We stopped for a photo op at the border stone:


As you can see, we had genuine Arctic weather today! It was snowing and below freezing when we set out. But we are tough! We were mostly walking along an old road that was built during WWII. Finland at that time was aligned with Germany, allowing German occupation of Lapland to fight the USSR (which Finland had to do to maintain its independence). The road was built through the German army with labor of Russian prisoners of war. 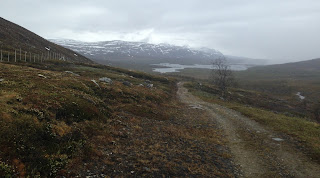 The fence on the left side of the photo is a reindeer fence. Sami reindeer herders used to be able to move around the entire region, but now there is a fence dividing the Finnish and Norwegian reindeer herds. While walking on the road, we would frequently stop to hear information shared by Antero about the plants, animals, and people of this area. 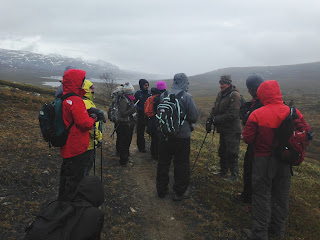 It was a nice hike for exploration, but tomorrow we get down to business! Over the first couple of days here, students have had a chance to see the region while finalizing the plans for their independent research projects. Tomorrow, they start their own research!