This is my second day of field work in the dry valleys. Today I was sampling along stream edges for moss. I've been sampling moss for a few years in the dry valleys, and I'm trying to sample from new areas this year that I haven't sampled in the past.

Moss is the only true plant in the dry valleys, though it hardly fits the definition of "plant" that most of us think of. Moss are bryophytes, which are a type of non-vascular plant. In the dry valleys, where temperature, sunlight, and dryness are very harsh to deal with, they grow very slowly. We find them mostly in small patches near sources of water, like streams and snowpatches. Here's a photo of some moss I was sampling at Crescent Stream. Can you see the moss? It's reddish-brown and looks kind of fluffy. 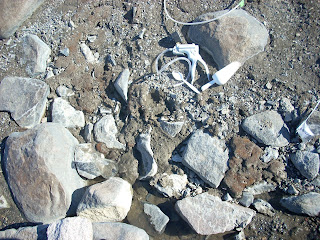 During the winter there's no sunlight for photosynthesis, but during the summer the sun can be so intense that it can actually damage plants. (Largely due to the intense UV radiation that I mentioned a couple days ago.) Most of the time you do not find moss that is lush and green, because it's usually too cold, too dry, or there's too much sun damage. The moss I find tends to be brown, because it is "moribund". That means it's not dead, but also not very healthy. The moss is less active in that state, but parts of it can be. I can find green moss in spots where it's protected from the intense sun, though. Here's a little patch of green moss that I uncovered when I moved a rock out of the way at Crescent Stream. 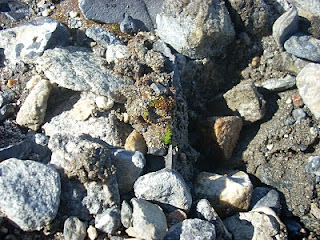 Just like all other plants, moss need water and nutrients to grow. I want to know where the moss is getting its nutrients from. I'm interested in the nutrients in moss because, when mosses die, they decompose in the soil. The carbon and nutrients released from mosses when they decompose are probably a very important part of the soil food web that our group studies. So, when I sample the moss, I also sample the soil, stream water, and ground water, which are the possible sources of nutrients for the moss. You can see some of my tools in the photo above. I scoop the moss into a bag with a spoon, then the soil beneath with a little plastic shovel. I take stream water right out of the stream into a bottle. The trickier part is getting the ground water. To do that, I use a miniature well called a piezometer. Essentially, I insert a tube into the ground until it hits the ground water, then I use a vacuum pump to pull the water up into my flask. Here's a video showing you how it works (as well as some nice scenery along Crescent Stream!).

Since the dry valleys are a desert, moss need to grown near a source of water. The easiest place to find them is right next to a stream. So, to do this sampling, I tagged along with the Stream Team as they went about their daily chores at some of the streams. They have to measure the amount of water flowing in each of the streams and take stream water samples for chemistry. Since I can't travel by myself, I was able to go to the streams they scheduled to visit today to do my moss sampling at the same time. This is what they were doing while I was sampling moss: 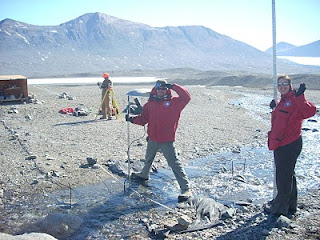 I was able to sample moss from four streams since I've been here, all along the south side of Lake Fryxell. I hiked from one end of the lake to the other, stopping at each un-sampled stream area that I came across. I'm tired!
Posted by Dr. Becky No comments: