Our research is about soil and the microscopic organisms living in it, but we also get to see a lot of bigger animals that live in Antarctica. We’ve seen whales, dolphins, seals, and lots of different birds. We’ve seen a few different species of seal, but mostly elephant seals and fur seals. Anyone who followed my blog last year knows all about elephant seals, because there are a LOT of them at Rothera Station. This is the first year I’ve worked around a lot of fur seals.

Fur seals are more closely related to sea lions than they are to other seals. They have external ears and can walk on all fours, like sea lions. The Antarctic fur seal is one of two species that live in Antarctica. Its scientific name is Arctocephalus gazella, and it is also known as the Kerguelen fur seal. They live on rocky or sandy beaches along the Antarctic Peninsula and nearby islands, including all of the places we’ve sampled so far. Here’s a great photo that our lab technician Cindy took at Signy Island: 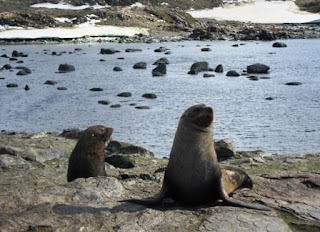 Antarctic fur seals are dark brown, and have what we call sexual dimorphism. That means that the males and females look different from each other. Males are much bigger than females, weighing a few hundred pounds (anywhere from 200 to over 400 lbs), and they get a silver-streaked mane.

Fur seals eat mostly krill during the summer (right now), with occasional fish or squid. They will go out to feed for several days, following the krill up and down in the water column. The rest of the time they mostly lie around on the beaches. We usually see them lying around lazily, but sometimes they’re also playing in the water, which is fun to watch! 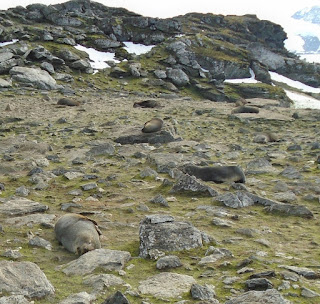 We are here in Antarctica right at the end of their breeding season. Fur seals breed in groups, where a dominant male can mate with around a dozen or more females. Females are pregnant for just over a year, and pups are born during the following summer. About a week after they’re born, they are left alone in groups while the mothers go out to feed. The mothers return to feed them about two days out of each week, and they are weaned after four months, leaving the colonies in late summer (right about now).

Because of their dense fur, they were hunted for their pelts. In many places, they were hunted to local extinction. (Local extinction means almost completely gone from that particular area, but still living in other places so not totally extinct. It means the population is overall smaller, living in fewer habitats, and therefore more at risk of going extinct altogether.) So many Antarctic fur seals were hunted that they went locally extinct over most of their range, but a small population remained and expanded once the fur seal became a protected species and hunting stopped. 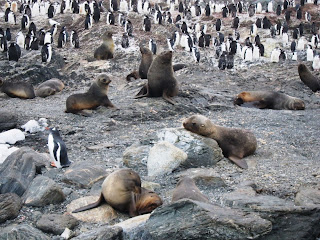 Fur seals are much more aggressive than other seals I’ve worked around, and they’ve been known to charge at people. They can move pretty fast, despite being over 6 feet long and weighing hundreds of pounds! We try to stay as far from them as possible, because we’re not allowed to disturb the wildlife (and don’t want to be chased!), but many of the beaches we land on are covered with a lot of them. Mostly they just snort at us, just like the elephant seals do, but the other day while we were walking to our sampling site on King George Island, one charged at us. We ran! Kelli ran the fastest, because she does NOT like fur seals. I still like them better than elephant seals, though, because they’re less noisy.

(Source: Stonehouse, B. Encyclopedia of Antarctica and the Southern Oceans. Learn more about them on Wikipedia.)
Posted by Dr. Becky No comments: