We have arrived on Antarctica! 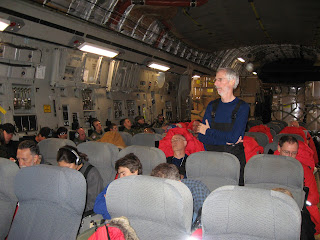 Friday morning we left New Zealand on a US Air Force C-17 airplane (crewed by the awesome 62d Airlift Wing from McChord Air Force Base). In the picture on the left, Ross is stretching his legs during the 5 hour flight.
We were allowed to come into the cockpit during the flight, which gave us a great view of the ocean, sea ice, and the Antarctic continent as we approached. 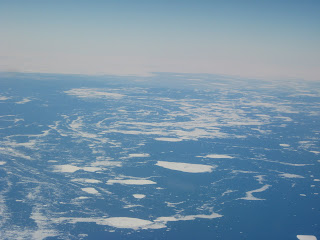 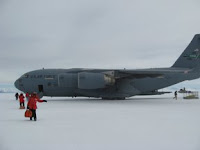 After we landed, we traveled to our new home: McMurdo Station. We have spent the past day and a half setting up our lab and preparing for our field work. We have machines to set up, supplies to collectto wash, chemical solutions to make, and camping gear to collect before we can begin our research. 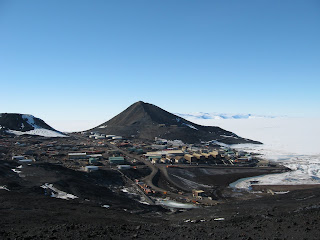 So far the weather has been great! It is

slightly below freezing (about 30 degrees Fahrenheit) but overall much warmer than Dartmouth was when we left! Since we're in the Antarctic circle, the sun never sets and there are 24 hours of daylight. The earth is tilted, so as the Earth revolves around the sun (which takes one year), certain parts of the Earth are closer to the sun at different times of the year. This is why we get different seasons of warm and cold temperatures during the year. Right now, the southern hemisphere is closer to the sun than the northern hemisphere. That makes it summer here, but winter for the northern hemisphere. Antarctica is at the tip of the southern hemisphere, so always facing the sun during this time of the year. In six months, the Earth will be on the other side of the sun and it will be winter on Antarctica, with 24 hours of darkness (which it will be summer for us in the US!).

Below are a couple of pictures from areas nearby our base. Elizabeth is walking around a pond. She's the small red dot on the other side of the pond. She was very excited, because she found some algae and bacteria growing on the rocks alongside the stream! The ball in the mountain behind her houses a very large satellite dish that tracks the US space shuttles. In the second picture, I am squatting in front of the Ross Sea (which is frozen). On the far side of the Ross Sea is the Royal Society Range of the Trans-Antarctic Mountains. We will be doing most of our research in the valleys of this mountain range. The mountains appear fairly close, but they are actually about 60-70 miles or so away from me. That means it would take an entire hour for me to drive across if I could go as fast as a car on the highway in the U.S. Since there are very few people or man-made objects here, there aren't very many things to help you judge the size and distance of things. 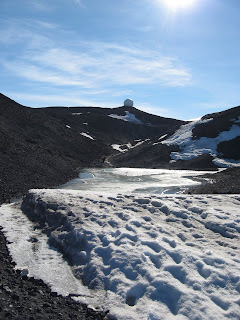 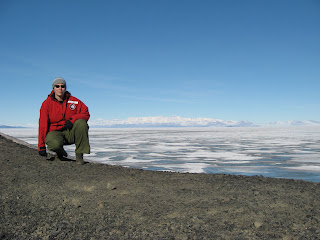