Mosses: the Dense Forests of Antarctica

Not many plants grow on Antarctica, especially in the area of the Dry Valleys. However, there are in fact plants here! They are mosses. Mosses are small, simple plants that are very short and soft. They are not like the things you think of when you hear the word "plant". They do not have flowers or seeds, do not have big leaves and long stems, and do not grow very tall. Mosses grow in most places around the world. You've seen them before, especially growing in or near streams or other wet places. There are many different types of mosses around the world. But, here in the Dry Valleys of Antarctica, there are only four species off moss. They are the only plants that grow in the soil. So, on Antarctica, moss patches are equivalent to redwood forests in the U.S.! Here is Elizabeth sitting next to an Antarctic "forest": 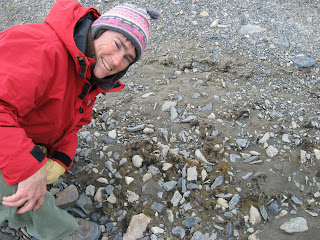 During the summers, mosses grow in wet areas beside streams, lakes, or snow patches. They grow very slowly, less than a millimeter each year. During the winter, when there is no sunlight for months, the mosses become dormant.

Elizabeth studies mosses. She wants to know why mosses grow in some places in the Dry Valleys, but not others. She also wants to know whether the mosses change the soil that they grow in. 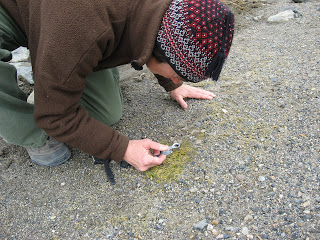 To learn about the mosses and soils, we take a lot of samples. In areas where we find mosses, we take a small piece of moss and the soil beneath it. We also take soil from similar nearby areas that do not have mosses, so that we can look for differences between areas where mosses live and do not live.

We have to be very careful when we walk around these areas, so that we do not crush the mosses we want to study! We have to "rock hop" through the streams, stepping only on large rocks, and not the sediment or mosses. 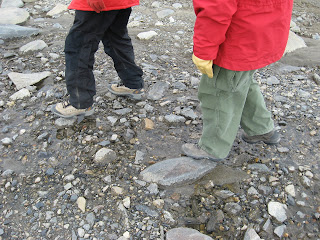 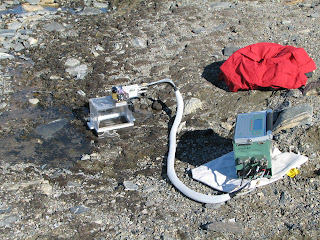 We still have a lot more samples to take for Elizabeth's project. We spent time last week sampling streams near Lake Fryxell. Later this week and next week, we will visit many more sites to sample for mosses along lakes, streams, and snow patches.
Posted by Dr. Becky 5 comments:

The Swedish icebreaker "Oden" is on town! 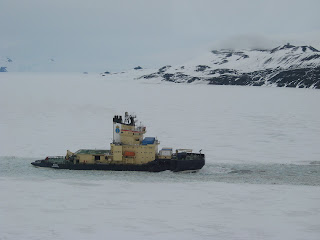 An icebreaker is a special type of ship that is designed to break through the ice covering the frozen water. This particular icebreaker belongs to Sweden, and is named "The Oden." The Swedes piloted the ship from Sweden in October, and came south by way of Chile. They then came to McMurdo to break a path in the sea ice, so that supply ships can access McMurdo. Oden will make a path that will allow other ships to drop off food and supplies for McMurdo station and pick up samples that the scientists want to ship back to the US. Some of our samples will be traveling on those vessels. And, next year, we'll be eating some of the food it delivers!

While the Oden was in town, we got a chance to tour the boat and learn how the ship runs.

On the top deck is the "bridge", where the controls are located to steer the ship. This is where all of the action happens! There's a lot of high-tech gadgets that help the Oden run. There are computers, GPS's, radars, and maps that the captain and crew use to direct the ship. They have sonar that allows them to see the bottom of the ocean they are traveling over. They could even potentially see sunken ships below them. The bridge is also where the communications are located. They communicate mainly by iridium phone, which are special types of satellite cell phones that we also use here on Antarctica. 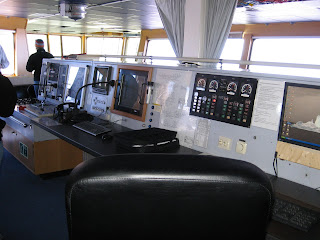 This particular icebreaker works by ramming the ice. It powers ahead very quickly and runs up onto the ice in front of it, crushing the ice to pieces. It then backs up, and rams again. This is a very slow process! When the Oden is smashing a path through ice, it only travels about 5 mph total. Even though the icebreaker moves very slowly, it has to have a lot of power to ram itself into the thick ice with enough force to break it. The Oden has HUGE engines that total 25,000 horse power! 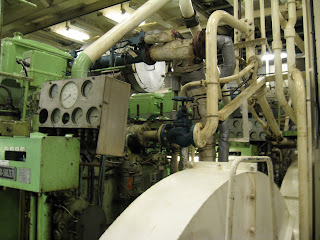 To help melt the ice to make it easier to break, huge amounts of sea water are sprayed out of the sides through huge pipes running through the ship. Water is moved through the pipes from one side of the ship to the other and sprayed onto the ice from the front of the ship. Here is Breana with the Captain of the Oden, who was one of our tour guides. Behind the Captain, is one of the pumps that moves the water across the ship. 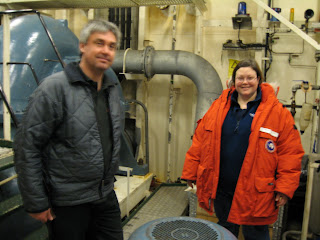 The Oden smashed through the ice a path that leads from the sea ice edge to McMurdo's dock. After its first run through the ice, it left a trail that was only the width of one ship, with a lot of ice floating in the way. Here is a view of the path from the bridge of the Oden: 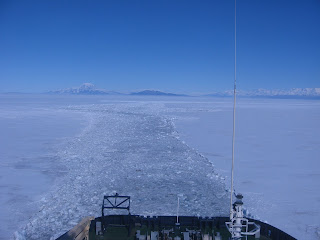 Since it's arrival, Oden has been going back-and-forth over that same path, widening it and making sure the ice is gone for future supply ships. Now, the part of the path running in front of Mt. Erebus looks like this: 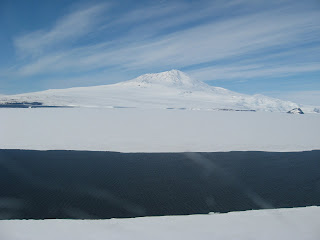 It has been very fun having the Oden in town. It carries 16 Swedish crew members, as well as Swedish scientists that study marine biology along the way. It's been fun having some Swedes on base! Our tour was given by members of the crew, so we could learn first-hand what it's like to live on board the Oden for three months. The Oden has many cabins for sleeping, a cafeteria and bar, and a supermarket on board for toiletries and souveniers. The Oden also has a sauna, which is an important part of a relaxing Swedish evening!

Usually, the Oden services Arctic areas, and this is its first trip to Antarctica! That means that the Swedes aboard the Oden were excited to learn about Antarctica, too. In return for letting us tour the Oden, they got a tour of McMurdo and our science labs.

Now that there is an ice-free path leading to McMurdo, supply ships will be able to deliver necessary supplies. The path it makes can also be used by the marine animals. Recently, there have been several penguin sightings on base! Penguins have been wandering into McMurdo, since they can swim right up along the path made by Oden. I think that's a far more fun benefit of the icebreaker than more dehydrated food deliveries!
Posted by Dr. Becky No comments: