We have returned from a 9-day trip out to a few different field camps. We were finally able to start collecting our soil samples!

The first place we went is called Mars Oasis. To get there, we flew on a Twin Otter airplane that landed on Utopia Glacier. We camped on the glacier for 6 days. Here’s a picture of the glacier that we landed and camped on. We set up our camp near the dark spots towards the back, where the plane had enough space to land and there were no known crevasses. 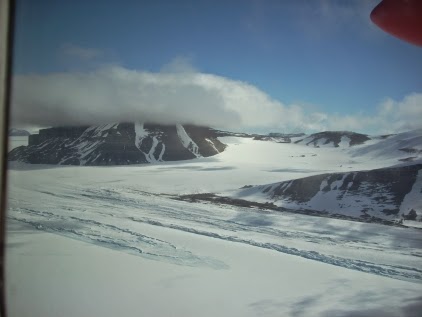 We skied from our campsite to Mars Oasis at the base of the glacier, which is an area of exposed soil under some cliffs. That’s the hunk of land sticking out at the left of the picture. This is where we collected our first set of samples!

Our goal is to collect soil from beneath different types of plant and fungal growth. We want to know how different above-ground organisms influence the microscopic organisms living in the soil. We collected soil from beneath moss, lichens, and algae. We also collected bare soil with no above-ground growth to compare these to. When we extract the bacteria, fungi, and invertebrates (like nematodes and mites), we will find out whether the soil community is more abundant or more diverse under particular types of growth.
We collect five soil samples from beneath each growth type, so we collected 20 samples total from Mars Oasis. Five samples gives us replication. That way, we know that we are measuring a real pattern. If we only took one sample from under moss and found a large amount of soil diversity, we wouldn’t know if it was because of the moss or if it just happened to be that way by accident. If we find a large amount of diversity under all five moss samples, we will be more certain that moss has a big influence over soil diversity.

We also traveled to a second field site at Sky Blu. This site is much farther south on the mainland of the continent, and is almost completely covered by ice. The only soil available is from the tops of large mountains that poke through the ice. These mountain tops are called nunataks. We sampled soil from the nunataks as well, so that we can compare how above-ground growth influences soil organisms at multiple sites.

Sky Blu has a permanent camp, so we were able to stay in shelters instead of camping in tents. It was -14°C while we were there. I’ve been traveling with a bear from Mrs. Metcalfe’s class in Phoenix, AZ. Here he is at Sky Blu camp with one of the nunataks in the background. 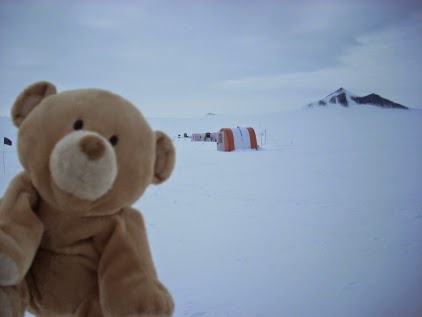 Now that we have collected our first set of soil samples, we have a lot of work to do in the lab. We need to extract the organisms we are interested in measuring, and we need to measure the chemistry on the soils. I will tell you more about that in my next post. However, right now, I need to get back to work in the lab!
Posted by Dr. Becky No comments: