A few days ago, we flew from Punta Arenas, Chile to Rothera Station in Antarctica. We flew in a small Dash 7 that is operated by the British Antarctic Survey.

We flew south over the Strait of Magellan, Tierra del Fuego, the Drake Passage, and on to the Antarctic Peninsula. As we approached Antarctica, we could start to see the sea ice (the ice-cap over the ocean) and the mountains poking out of the ice sheet on the mainland.

After a five hour flight, we landed at Rothera Station. This is the British research station on the tip of Adelaide Island along the west coast of the Antarctic Peninsula (at 67°S latitude). 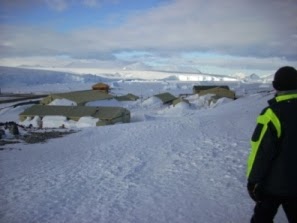 Since our arrival a few days ago, we’ve been taking our final training courses. We’ve had station orientation, survival training, aircraft safety, communication procedures, and medical first aid. We’ve also been setting up our lab to process soil samples for biology and chemistry. Soon, we will finally be able to get into the field to collect some samples!
Posted by Dr. Becky No comments: