Much of Antarctica is a polar desert, including the Dry Valleys. This does not mean that there is no water, however. There are many forms of water on Antarctica. There are lakes and streams, glaciers and ice, and snow.

Water on Earth (including Antarctica) is always in movement. It can be liquid (how we usually think of water), but also frozen as ice or as a gas in the air. The sun heats water in the oceans, which causes water to become a gas. This water vapor moves through the air and eventually becomes the clouds high up in the atmosphere. Clouds release the water vapor as precipitation. In most places, precipitation falls and flows along the ground, creating streams and rivers that flow into lakes and the ocean. In the lakes and ocean, the water is then heated again, causing the water to vaporize and return to the clouds. This is the water cycle!

However, in the Dry Valleys and other areas of Antarctica, very little precipitation falls. The only precipitation that does fall is snow, not rain. This means that the ground is very dry, and most of the water in it is frozen. The layer of frozen water in soil is called permafrost. Streams and lakes here on Antarctica are not formed by precipitation, like in most other places. The water cycle is a bit different here.

Since it is so cold here, much of the snow that has fallen throughout history remains today as glaciers and ice sheets. New snow falling compacts previous years of snow until thick glaciers and ice sheets are formed that cover the ground. But, the water cycle does not end on Antarctica. It is just slow, since it is frozen much of the time. Glaciers and ice sheets melt a little bit during the summer. The air needs to only be just a tiny degree above the freezing point, and water will flow from the glaciers. You can see the edge of Canada Glacier melting, where Elizabeth and I were two days ago: 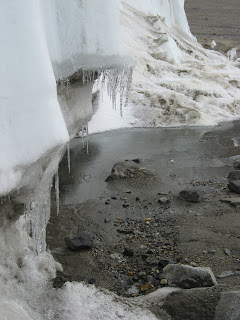 This water flows from the glaciers downhill as streams and creeks. Sometimes there is so much water flowing that it becomes a river! The Onyx River, in Wright Valley, is Antarctica's longest river. We flew over it last week when we were at the Dais. 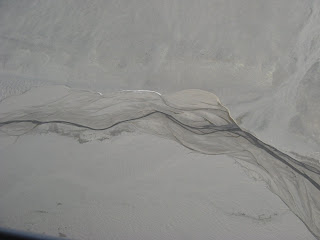 The streams, creeks, and rivers flow into lakes. Here is a picture of the Lake Fryxell basin from a helicopter. You can see the Commonwealth Glacier, with streams and creeks flowing from it into Lake Fryxell (which is covered with ice). Though these lakes are covered with a thick layer of ice, there is plenty of liquid water beneath the ice. The dark blue edges around the lake is called the "moat" where the ice has melted away, and liquid water is visible. 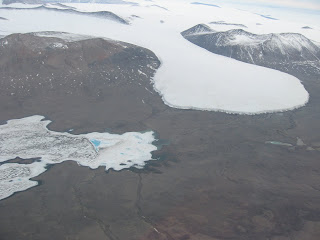 Unlike lakes in the US, the lakes in the Dry Valleys are closed systems. There are no streams that flow away from the lakes. Water only enters in. So, as the glaciers melt, the lakes become larger. Since temperatures have been rising, glaciers have been melting faster. Lake Bonney in particular has been rising, so that they keep having to move the camp buildings onto higher ground!

Besides glaciers, water is also provided by snow. Much of Antarctica is a Polar Desert, meaning that not much snow falls. In many places on Antarctica, you can find deep snow. But, unlike the US, that snow did not all fall this year. It's a combination of many decades' worth of snow sitting on top of the ice sheets and glaciers. In the Dry Valleys, there is no ice cover, but bare soil. Most snow that falls in the Dry Valleys instantly disappears once it hits the ground, because the soil is so thirsty! However, some snow remains in patches and melt very slowly. These snow patches can provide a source of water for anything living nearby. It's a great place to find mosses growing! 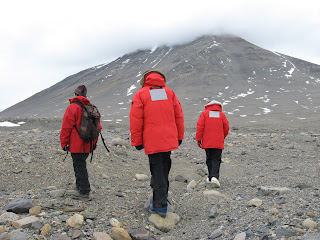 Besides freshwater, there is also salt water around. Taylor Valley ends at the Ross Sea, which opens into the ocean. Most of the Ross Sea is covered in ice. But, like the lakes, there's a ton of liquid water beneath it! 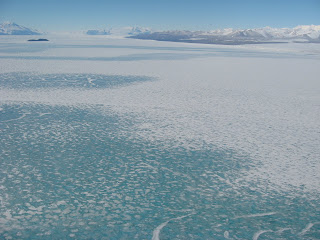 So, as you can see, the water cycle does not stop just because it's cold here. Water is still moving, and the areas with liquid water become very important to the small forms of life that live in the Dry Valleys!
Posted by Dr. Becky 10 comments: