A tale of moss and soil in the Dry Valleys

I've posted before about some of our field work sampling moss in the McMurdo Dry Valleys. 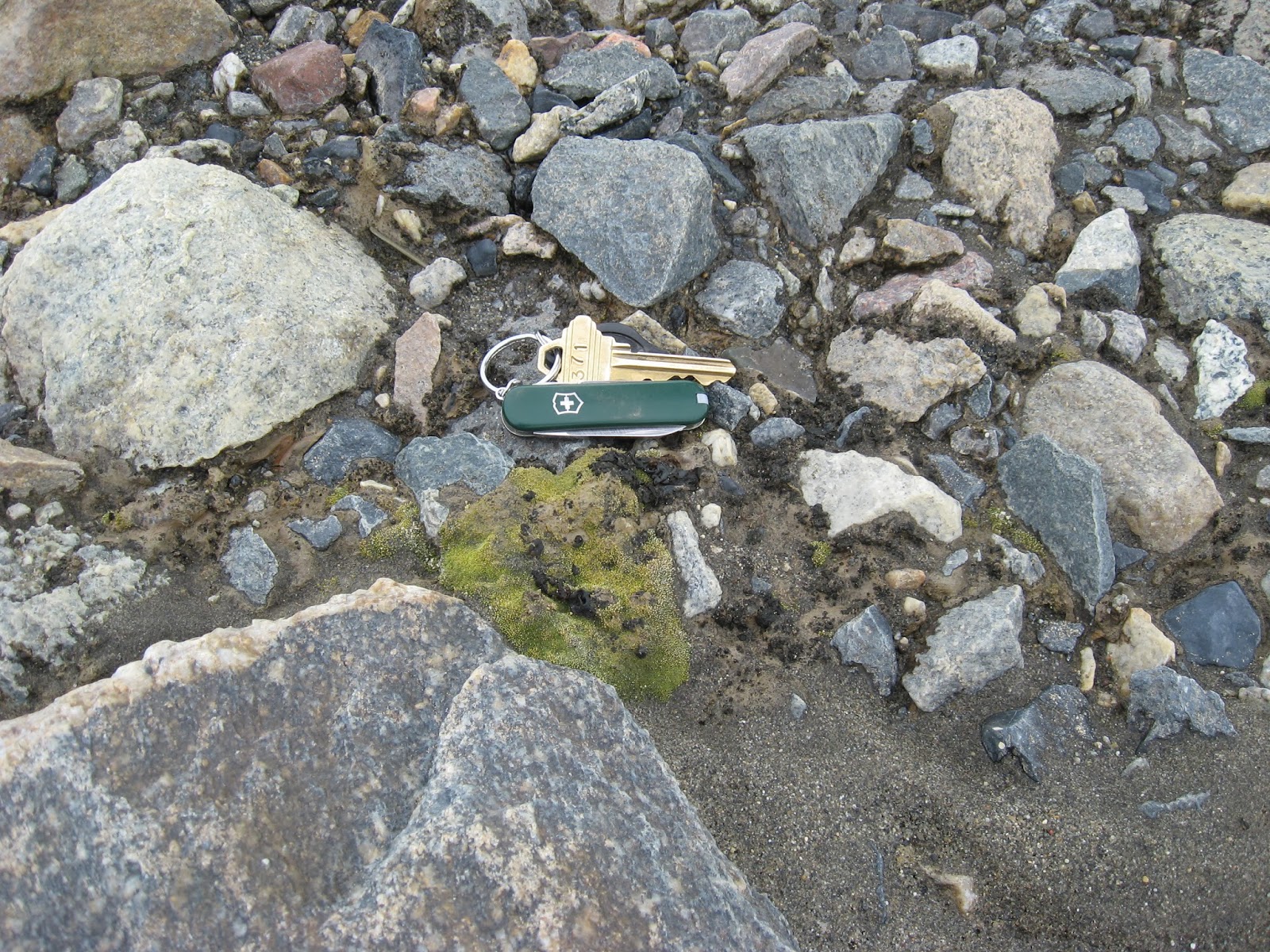 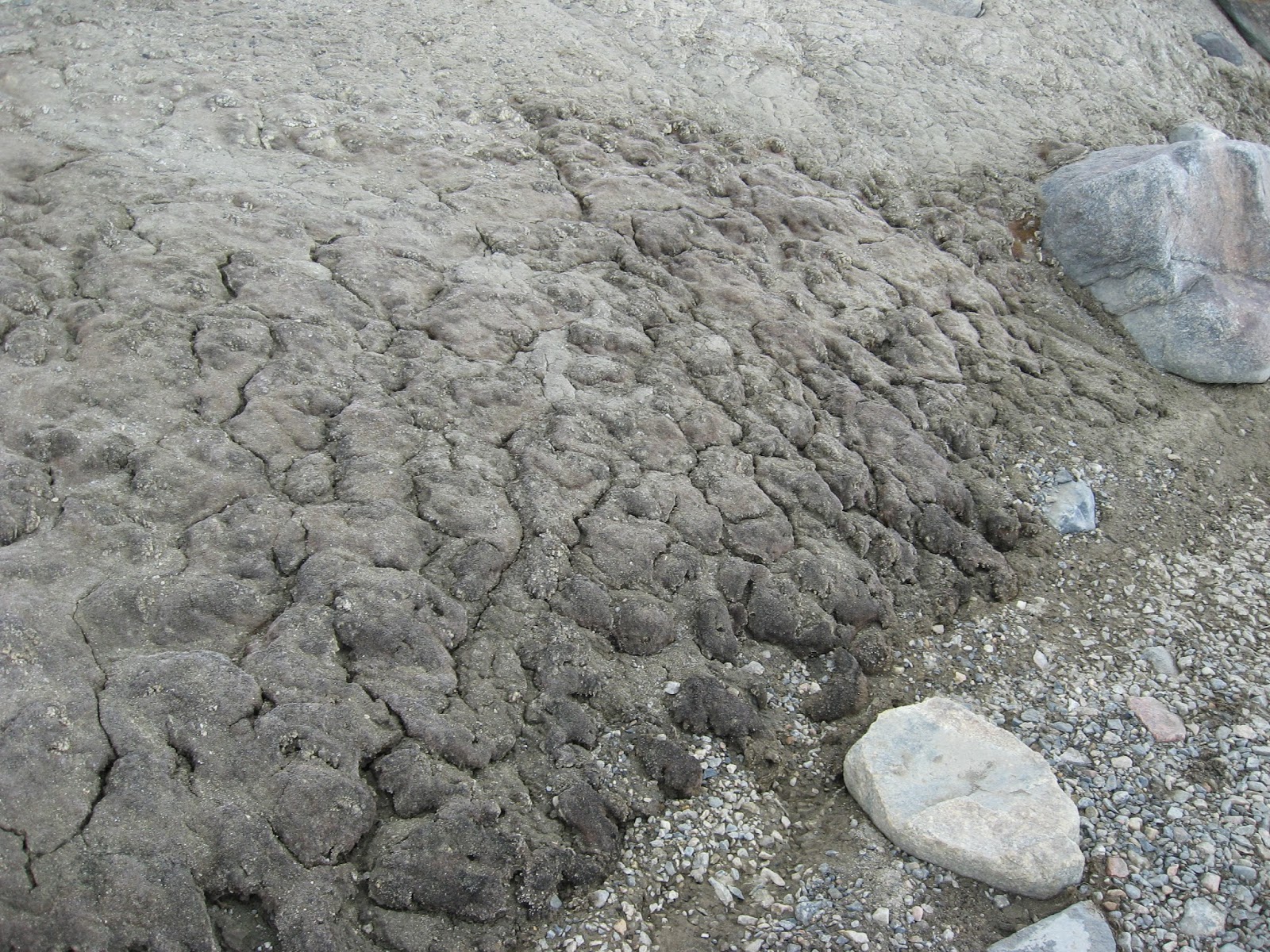 Moss are important to understand because, in the Dry Valleys, there are no other plants growing above the soil. Moss patches are the closest thing that the Dry Valleys have to forests! Sometimes the moss grows in small patches, like in the top photo on the left, but sometimes it's extensive, like the photo below it.

We want to understand the role moss play in the overall ecology of the Dry Valleys. How abundant are they across the ecosystem? How much nutrients do they take up from the environment? Where do their nutrients come from?

We traveled all around the Dry Valleys to collect moss from as many places as we could find. You can see an interactive map of all of the samples we collected by clicking here.Thanks to amazing satellite imagery, you can zoom in close enough to see the terrain at each of the spots where we took a moss sample!

We wanted to know whether moss can live everywhere in the Dry Valleys, or if there has to be very particular environmental conditions for them to grow. We compared soil chemistry in places where moss was growing with places where moss was not growing.  We learned that soils beneath moss tend to be slightly less salty and lower in pH (more neutral than basic) than soils without moss growing on them. That may be the result of the moss needing to grow in less salty, more neutral soil. (In other words, maybe the soil is already less salty and lower pH, so the moss are able to grow there.) Or, it could be that moss can grow anywhere and then turn the soil into something less salty and more neutral. (In other words, maybe the soil becomes less salty and lower in pH after the moss starts growing there.) We don't know yet! That's something we can look into with more experiments.

We also learned that there is a lot of variability in the nutrient content of moss. Sometimes the moss at one site differs in nutrient content from moss at another site. For example, moss growing at Canada Stream contained more nitrogen and phosphorus than moss growing at other places. (Those are the yellow dots in the graph below. They're higher up on the vertical axis than many of the other sites, which are the other color dots.) Moss growing in the Lake Bonney Basin had the lowest nitrogen and phosphorus content of the moss we sampled. (They're hard to pick out of the graph, though, because they're overlapped by so many other dots.) Often, though, the nutrient content in moss varies a lot within one site, making it hard to tell sites apart. Of the dozens of sites we visited, the only ones that seemed distinct in nutrient content were the extremely high and extremely low. The rest blend in with each other, as you can see in the graph.

We also learned that most of the nutrients in the moss come from the soil, rather than water. However, the soil doesn't explain everything. In the graph above, you see that as soil nitrogen and phosphorus increases (moving towards the right on the horizontal axis), moss nutrients also tend to increase (moving higher on the vertical axis), but there's a LOT of variability around that. The dots don't stay close to the line, but instead are scattered around.

(For those that are curious, the purple dot waaaay out to the right on the phosphorus graph is moss from one of the penguin rookeries. Penguin guano contains a lot of phosphorus!)

The relationships with soil are tighter than with water's levels of nutrients, though. That's why, in this graph below, the triangle representing moss nitrogen (N) content is closest to the arrow for soil N, not Stream or Groundwater N. The triangle for moss phosphorus (P) content is closest to soil PO4 (phosphate), not Stream or Ground PO4. You'll notice that the relationship between moss and soil N is a bit tighter than moss and soil P, though. 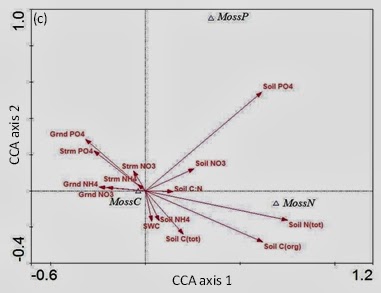 So what does all of this mean? If the pulse events that I describe in earlier posts make water more available in the future, moss may be able to grow more. We were hoping that we could predict how nutrient cycles would change by knowing the source of moss nutrients and how much they take up. However, we learned that their nutrient uptake is highly variable, which will make it hard to predict how nutrient cycling will change with that increase in moss growth.

The results of this experiment are published in the article: Ball B. and Virginia R. 2014.  The ecological role of moss in a polar desert: Implications for aboveground-belowground and terrestrial-aquatic linkages. Polar Biology.