We finally made it through the Drake Passage! It was a rough ride, so I’m glad it’s over. Today, we were helping out another project.

Over a year ago, a group of scientists dropped moorings into the ocean to measure sea temperature. They are concerned that temperature change will allow an invasive crab to move into Antarctica from the deep ocean. The crab could have a BIG impact, because it would be a new predator in the ecosystem! The deep ocean crab hasn’t been able to live in Antarctica because the temperature is too cold and magnesium levels in the water are too high. But, with global climate change, the water has been changing. Over a year ago, the scientists dropped temperature sensors into the ocean that were anchored into the ocean floor. Temperature probes measured the sea temperature at certain depths over the course of the past year. Since we were in the area (and Maggie, one of the scientists in their group, is on the LMG right now), we stopped at each of the moorings to pick up the data loggers.

First, we had to hover the boat in just the right spot so that the computers on the LMG can “talk” to the receiver attached to the mooring. Once we made the link, the technician on the LMG pressed a button to release the data loggers from the moorings. The data loggers gradually floated to the surface attached to yellow buoys. Once it floated to the top, we had to find them floating on the water. All of the people on board were scattered around the bridge and decks to find the buoys when they popped up. (Whoever spotted it first won a candy bar!) I was up on the bridge with the Captain, First Mate, and a couple other scientists. 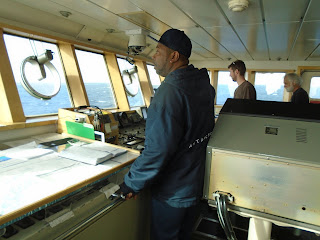 It’s hard to notice a small yellow buoy on open water. In the photo below, can you see it? It’s there! (Hint: it’s over on the right side of the photo.) Now picture trying to find it floating among white-caps on the waves, ice bergs, and birds! 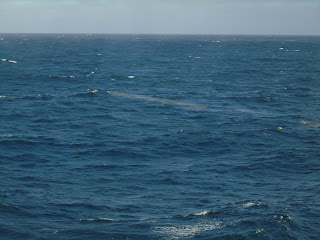 Once it was spotted, the captain would steer the boat close to the buoy and someone on deck would hook it with a grappling hook and pull it on board. The data loggers are just small silver cylinders attached to the big buoy. 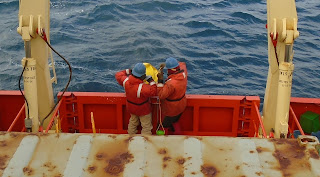 We collected the buoys from three different moorings off the coast of the Antarctic Peninsula. Now, Maggie has the data loggers carrying over a year’s worth of sea temperature data. She will send them back to the scientists in the U.S., who will look at the data to see how it influences the spread of the crab species. Curious? You can learn more about their research project at: poletopolescience.blogspot.com. There’s a video you can watch on their homepage that tells you all about it!

Now, we are on our way to Biscoe Point on Anvers Island, which will be our first sampling site!
Posted by Dr. Becky 1 comment: