As I've said before, Antarctica is a very hard place to live. It's not just hard for animals, but also for plants. It's very dry, so plants cannot get much water to grow. The only time water is plentiful is during the 14 weeks of the year when the meltwater streams are flowing, and that water is only available if you're right next to the stream. Sunlight is also a problem. During the winter there's no sunlight for photosynthesis, but during the summer the sun can be so intense that it can actually damage plants. So, it takes a very hardy plant to be able to grow here! 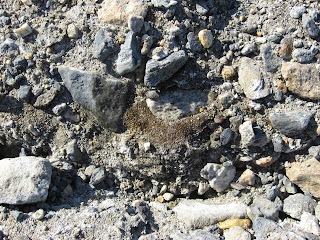 The only plants we have in the dry valleys are mosses. Very short mosses. There are no vascular plants, which are what most people think of when they hear the word "plant". Mosses mainly grow in patches along streams or beneath snow patches, which is only a small percent of the land area. They grow incredibly slowly. We're talking less than a millimeter of growth per year! Most of the moss we see look like the photo above from right outside the Lake Fryxell camp hut. They're not lush and green, because they're usually too cold, too dry, or have too much sun damage. But, sometimes you find a nice, lush green patch like the one below! This patch was probably recently uncovered from water, so is still very happy.

One of the really cool things about this patch of moss that Elizabeth, Katie, and Ross found is that it has reproductive structures. Moss is able to reproduce in two ways. It can reproduce by itself, where bits of the moss break off and become a new moss plant. In the dry valleys, these small bits of moss might blow in the wind to a new location, so that moss spread to new areas. Moss can also reproduce with each other. For this, the moss grow special structures. These special structures act like male and female parts, so that the sperm from the male structures fertilizes the female structures, forming spores (which are sort of like seeds in plants). When they're ready, the spores are released from the female structures to seed new areas. (Click here to see a video of moss reproduction.)

It is generally thought that moss in the dry valleys spread by pieces breaking off and becoming new mosses, not by developing spores. Growing the special reproductive structures requires a lot of energy and resources that are very hard to come by in the dry valleys. But, in this happy patch of moss, we see reproductive structures! Those white-ish stems coming up are the structures that contain the spores. Here's what one looks like under the microscope: 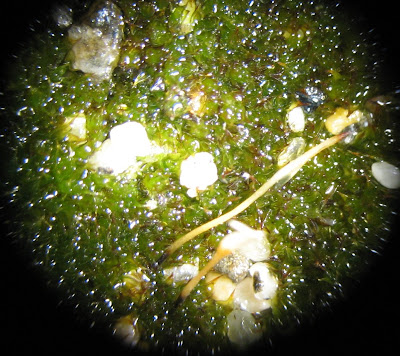 Moss is the only above-ground life in the dry valleys. All of the other organisms live in the soil, not on it. So, moss are in a way like the redwood forests of the Antarctic Dry Valleys! They are one of the few sources of food for soil organisms. When mosses die, they decompose in the soil, just like plants in warmer climates. The carbon and nutrients released from mosses when they decompose are probably a very important part of the soil food web. That is why so much of our research this year focuses on mosses. We want to know more about their role in the carbon and nutrient cycles in the dry valleys. We measure their photosynthesis rates, so that we know how much carbon they are taking from the air and putting into the soil. We measure their nutrients, so we know what type of food they are providing to the soil organisms. We measure how they respond to changes in moisture and nutrients in the soil, so that we know how stable their role is in nutrient cycles. 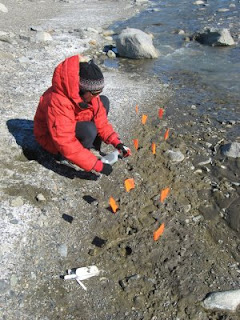 To see how the nutrients in moss respond to changing the nutrients around them, we spray salt solutions that contain nitrogen or phosphorus onto the mosses (very similar to the stoichiometry experiment using the "hula" cones). Here's a patch of mosses next to one of the streams. It's buried in silt a bit, but there are mosses down there! Katie is spraying the nutrient solutions on them. While we were at F6 this week, we took samples from the plot to see if adding nutrients around the mosses changed the nutrient content of the mosses themselves. We also have these plots set up around a few other streams that we will have to sample in the next week.
Posted by Dr. Becky No comments: