We’ve been trucking right along with our sampling! Our sampling at Elephant Island was quite a challenge. The katabatic winds coming down the cliffs made it difficult to get the zodiacs in. Katabatic winds are created by cool air masses rushing down a slope. They rush downslope because cold air is denser than warm air. The cold air is at high altitude because of the height of the island, but at the coast (where the island stops), the air is so dense that gravity causes it to rush down to sea level. (You can learn more about katabatics here.) The winds can be quite strong, sometimes reaching hurricane force! The katabatics at Elephant Island weren’t that bad, though they certainly caused very windy conditions for us. Even a mile or two offshore in the LMG, the wind was too strong to safely send a zodiac to shore because they are too light-weight and can be flipped over in 30-knot winds. Plus, we could see the winds churning up the water right at the shore, which would have prevented the zodiac from reaching the beach.

Later in the afternoon, there was a lull in the wind that gave us a window to use the zodiacs. We took just one zodiac with three of us (Becky, Uffe, and Dave) and two marine techs (nicknamed MT’s) to attempt a landing on the beach. It was a very bumpy zodiac ride over the swells! The MT’s didn’t want to bring the boat to shore because the swells would swamp it in the shallow water leading up to the beach. They had a plan that worked: They dropped the anchor a ways off shore, with a long rope attached. We let the boat ride a set of waves in closer to the beach where the three of us leapt out and waded to shore, letting the anchor line pull the boat back out to deeper water before more waves came.

The coast of Elephant Island is pretty steep, so we had to climb up a ridge to get to the plant material we wanted to sample under. 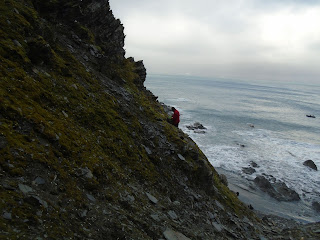 The MT’s waited for us out in the boat while we sampled, but called us back down when they felt the wind was picking up too much again. Luckily, we were almost done! They then redid their anchoring trick to pick us back up. We waded back to the boat, jumped in when the time was right, then pull-pull-pulled on the line to the anchor, through the waves, until we got the boat to water deep enough to put the motor back in the water and zoom off. It was an adventure and we got a bit wet, but it was a lot of fun! We are so impressed with the skill of our amazing MT’s Mike and Garrett, and we all returned to the LMG dripping with seawater but laughing.

After our sampling at Elephant Island, we moved south to Admiralty Bay in King George Island. It was a pretty chilly day, and it snowed on us a little bit. After sampling, we had the chance to visit the Polish research station on Admiralty Bay, called Arctowski Station (named after a Polish scientist who worked in Antarctica). They were very nice hosts who welcomed us with hot drinks and sweets while we talked about our various science projects. Here we are posing in front of the station with some of the LMG crew and a couple of the Polish scientists we met: 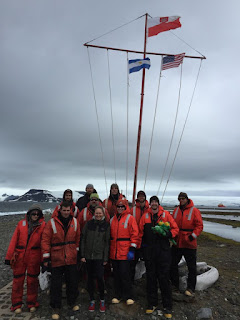 Now we’re headed south to Livingston Island for our next sampling site. We’re well ahead of schedule!