We've had a very special guest in town at McMurdo for the past week or two. Sir David Attenborough is down filming for his new nature series called Frozen Planet. This is the man who has narrated so many great nature series for the BBC. I grew up with The Trials of Life. You might know him from Planet Earth. You might not recognize his name or his face, but you know his voice, especially if you're my age. I have been SO EXCITED that he's here, because he is one of the inspirations behind me becoming a biologist. My sister and I have watched The Trials of Life over and over again since we were kids. Sir David's films make the many amazing aspects of our natural world so accessible and exciting to kids (and adults!), and he's been a major inspiration for most biologists my age.

So, I can't even tell you how excited I was when I actually got to meet Sir David last night!! I was able to tell him how big of an influence he has been and about what kind of research I do here in the dry valleys. Here's me with my hero: 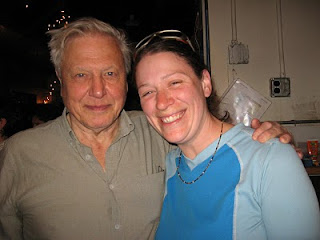 I also asked Sir David what he thought was the most amazing thing he's seen in Antarctica. His answer: the Trans-Antarctic Mountains. That's the mountain range that runs through the continent dividing it into an East and West half. It's one of the longest mountain chains in the world! Mountain ranges like the Trans-Antarctics are created through a process called "uplift", where two plates are pushed together, and the force of them being pushed together causes the contact point between the two plates to rise up. The presence of the mountains is what prevents the ice sheet from flowing in the valleys, creating the dry valleys where I work. Sir David thinks they're amazing because not only are they beautiful and created through such an amazing feat of nature, but because of the huge challenge they've posed for humans for over a century. When the early explorers were seeking the South Pole, they started from the Ross Sea (where I am) and had to attempt to cross through the Trans-Antarctic Mountains. Crossing these mountains posed a huge danger and required a large amount of hard work under grueling conditions for the early explorers, and frequently groups were stopped by the presence of the mountains. It's just one way that nature is more powerful than man! 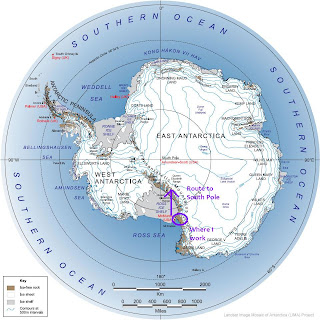 So, last night was a very special moment for me. When I was a kid watching the Trials of Life on video, I never would've thought that many years later I'd meet Sir David Attenborough all the way in Antarctica!
Posted by Dr. Becky 2 comments: