Back at the Lab

Jen and I finally made it back to McMurdo Station! We got stuck at Fryxell camp for a couple of days. The weather over McMurdo was bad, so the helicopters couldn't leave to pick us up. But, the weather in the dry valleys was very nice, so it was a nice place to be stuck. It's good to be back in town, though, because we have to process all of those samples we took to start getting some data! Since we were a day and a half behind, it's been a very busy couple of days (but at least we had a chance to shower and put on clean clothes for the first time in 8 days).

There are a lot of chemical and physical properties we measure on our soil samples. Some of them get done here at McMurdo, and some wait until we get home. One of the basic things we measure here on our soil samples is soil moisture. We want to know how much water is in the soil. Knowing how much water is in the soil tells us how much might be available for organisms living in the soil that need water. (It also helps us standardize all of the other measurements we make. If we express the amount of nutrients per gram of dry soil, it's standardized among all of the different soils we measure, rather than changing based on the amount of water in each sample if we expressed it per gram "fresh" soil.) We measure soil moisture by simply weighing a subsample of the soil, placing it in an oven at 105°C, then weighing it again after 24 hours. The weight lost was water that evaporated from the soil. Jenn and I both have weighed a lot of samples to measure moisture over the past two days. 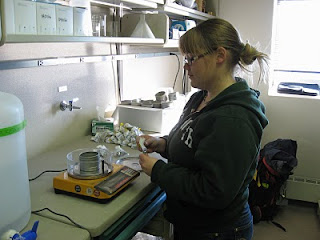 I also started working on the moss samples I took. To measure the nutrients in the moss, I first have to rinse away all of the soil that's mixed up with the moss. I have to do that using a microscope so that I can see that all of the little pebbles have been rinsed away. 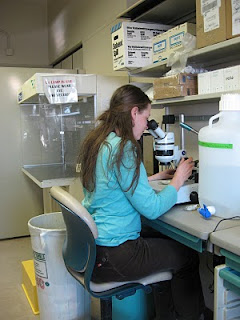 Yesterday, our colleagues from Colorado State arrived from the U.S. So, the lab has become very busy! Tomorrow, the other two group members from Dartmouth are scheduled to arrive, and then our group will be complete! So will 2009!
Posted by Dr. Becky No comments: