A lot of our field work tries to answer the question of how extra nutrients (like carbon, nitrogen, and phosphorus) affect soil biology. You can read about one of those experiments here in a previous posts. Sometimes it can be hard to measure biological activity in the field, because weather conditions might be bad the day we're there to make the measurements. If it happens to be cloudy and cold, the bacteria and fungi in the soil won't be very active, and it will be hard to measure their respiration. To deal with that problem, we also run a lot of experiments in the laboratory where we can keep the soils under better weather conditions where they'll be more active. (We call it measuring their "potential" activity.) 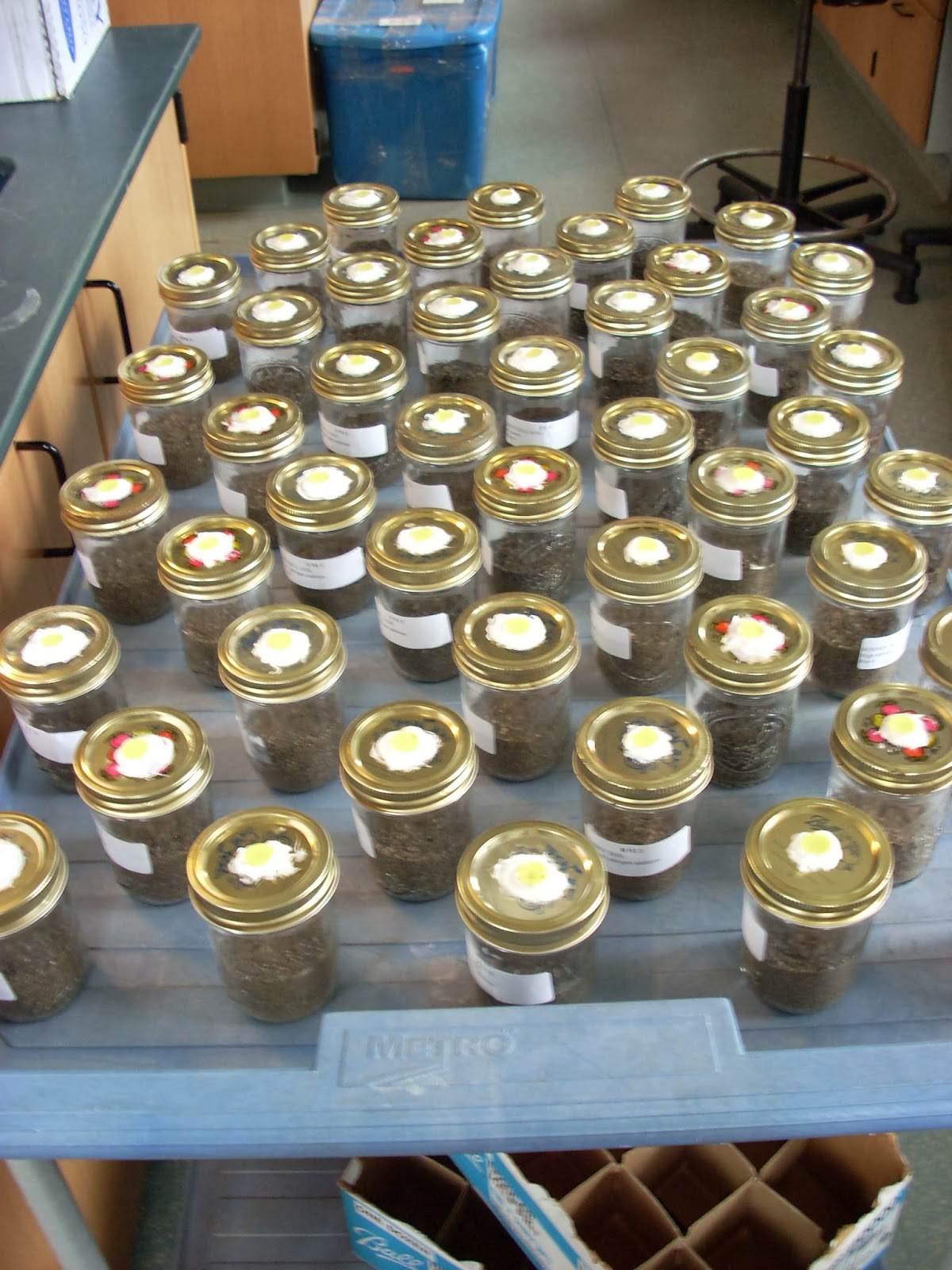 In the lab, we set up "miniature Dry Valleys" in jars. Each one of the jars in the picture has soil from the Dry Valleys. Half have soil from Lake Fryxell basin (which is naturally higher in phosphorus) and the other half has soil from Lake Bonney basin (which is naturally higher in nitrogen). We added different amounts of nitrogen to the jars. Some received low levels, some received medium levels, and some received high levels. (Others received no nitrogen at all, which was our control.) We tested our hypothesis that increasing the level of nitrogen would increasingly stimulate biology at Fryxell, where nitrogen is less plentiful than phosphorus. However we hypothesized that, when nitrogen was already plentiful (at Bonney), the higher levels of nitrogen addition would actually be toxic to the soil microbes. That's because nitrogen exists in the soil as a salt, and too much nitrogen can make the soil too salty to be healthy for the microbes.

The jars are sealed tightly so that no gas can escape. That way, all of the CO2 produced by the microbes as they respire stays trapped inside the jar. In the center of the lid is a silicone disc. The silicone keeps the gas trapped inside, but as you can see in the photo to the left, I can insert a needle through the disc to remove a sample of gas. I then measure the CO2 that is contained in the gas sample I removed by injecting that sample into the machine you see below. We also counted the number of bacterial and fungal cells in the soil using a microscope.

What does all of this mean, in the big picture? It means that nitrogen fertilization can influence carbon dynamics in soils of the Dry Valleys. If future changes in the Dry Valleys bring more nitrogen to the soil, it's not only nitrogen that will change. Respiration means microbes are eating carbon in the soil, so the changing respiration we measured means the amount of carbon lost from the soil will also change. However, the way it changes will depend on where in the Dry Valleys you are. In some places, like Bonney, there may be less respiration and carbon loss, but in other places, like Fryxell, there may be more respiration and carbon loss.

The results of this experiment are published in this article: Ball B, Virginia R. 2014. Microbial biomass and respiration responses to nitrogen fertilization in a polar desert. Polar Biology 37(4): 573-585.
Posted by Dr. Becky No comments: