Jenn and I have arrived at McMurdo Station, Antarctica! On Wednesday, we woke up early in Christchurch, packed our bags and were driven to the airport. There, we boarded a U.S. Air Force C-17 and flew from New Zealand to Antarctica. The crew flying the plane were from McChord Air Force Base in Washington, and they were very nice to us, their "cargo". There were about 40 passengers on the plane- mostly scientists. We also flew with a bunch of cargo destined for the South Pole. The weather was great, so our flight was easy and on time. The view from the window was great once we got over the continent. This is a picture from the porthole above my head on the plane. It's part of the continent that is covered by an ice sheet (which is about 98% of the continent). Off on the horizon you can see the ocean with icebergs floating in it. 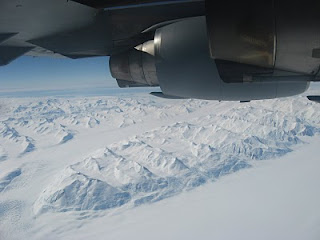 The mountain range that crosses Antarctica is (cleverly) called the Trans-Antarctic Mountain Range. Later in the flight, we were even allowed to go up into the cockpit for an even better view! 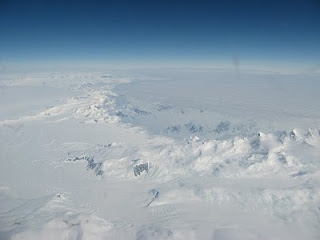 Then, after a 5-hour flight, we landed at Pegasus Airfield in Antarctica. This is an "ice runway". That means it's built on a sheet of very thick, permanent ice that covers the Ross Sea. So there's not even any solid ground under that ice holding the airplane up!
Here's Jenn in front of the C-17, right after we landed: 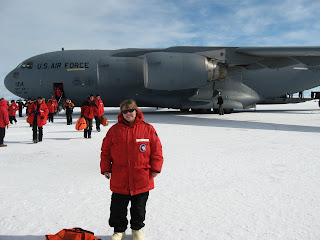 We've been in McMurdo for one whole day now. We've spent a lot of time in various training sessions. There's a lot we have to learn about how to live in Antarctica, because it's so environmentally protected and the climate can be so dangerous. We've learned about everything from lab safety to light vehicle driving to how to throw out our garbage!

Over the next couple of days, we'll continue setting up the lab and preparing our supplies for the field. There are a few more trainings we have to do, too. Tomorrow morning Jenn leaves for "snow school", which is where she learns outdoor survival skills. Let's hope for good weather for her. Snow school is much more fun when it's sunny!
Posted by Dr. Becky No comments: