We returned from the field on New Year's Eve. We quickly unpacked and took care of all of our samples for the evening. Then, we were ready to celebrate the holiday!

The new year starts for us 18 hours earlier than the east coast of the U.S., so we celebrated New Years Day before most of the U.S. woke up to New Years Eve. Here's Breana (one of the postdocs working with us down here from Colorado State) demonstrating how to celebrate New Years, McMurdo style: 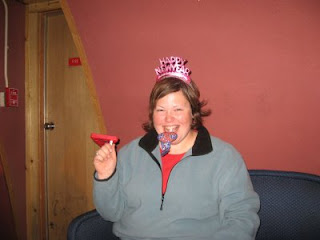 A New Year's tradition at McMurdo is a concert called Icestock. Different groups of people working here (that also happen to be musicians) form bands (to varying levels of success) . Most have only been playing together for a few weeks or months. A big stage is set up outside where each of the bands plays short sets for the crowd of dancing Antarcticans on New Years Eve. So that you can fully experience Icestock, here's a short clip of my favorite Icestock band called Sunday Britches:


To help us ring in the New Year, some people made really cool, big puppets out of random things you can find around McMurdo. They were built on backpack frames and paraded through the crowd of people listening to the live music. They were really creative! 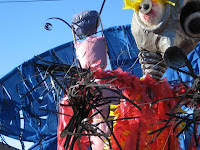 That's how we celebrated the coming of 2009 down here in McMurdo. Today, we are back in the lab processing our soil samples from the field and getting ready to head back out tomorrow morning!
Posted by Dr. Becky No comments: