We finally made it back to one of the penguin rookeries that we needed to visit. After two days of trying to get to Cape Crozier but being stopped by bad weather, we decided to try for Cape Bird instead. Ross and I made it there on Wednesday. Finally, we were able to get some more of our sampling done! 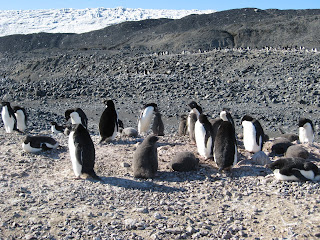 We did the same time of sampling at Cape Bird as we did at Cape Royds. It is interesting to do this at different rookeries because each of the three rookeries we want to visit have different sizes of penguin colonies living there. Cape Royds has several thousand breeding pairs of penguins, and Cape Bird has about 25,000. Cape Crozier has over 100,000! That means that "high activity" will be different at each of the rookeries, and we'll be able to learn more about the influence of different levels of penguin activity than we would at just one site.

There was one very curious penguin at one of our sampling spots. It wanted to inspect everything we were doing. At one point it even pecked at the shovel I was using! Here it is approaching Ross to see what he's doing with that sample bag: 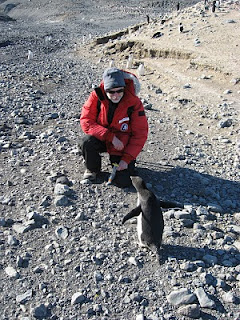 I learned something very interesting about Adelie penguins while I was there! They have spiny tongues! Penguins eat krill, which are small shrimp-like animals that live in the ocean. The spines on the Adelie's tongue helps them hold onto and swallow the little krill. Here's a photo of an Adelie tongue that I found online:

[photo credit: www.penguinscience.com]
So that's what I did yesterday. Today I am back at F6 for the next few days to finish up some projects in the Fryxell Basin. Let's hope the weather stays as beautiful as it is today!
Posted by Dr. Becky 1 comment: