Though we think of Antarctica as just being cold and ice covered, there is actually a lot of interesting geology here. 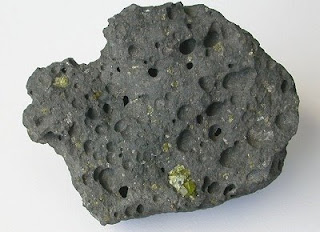 First, there is an active volcano! Mount Erebus is the southern-most active volcano in the world! It sits on Ross Island not too far from McMurdo Station, and you can see it from most of the hiking trails around McMurdo. Because Mt. Erebus is so close, most of the rocks in the area are volcanic, like the basalt to the left. These rocks are erupted from the volcano and can travel very far. So, Mt. Erebus's influence is seen all the way across the sea ice in the Dry Valleys where we work. Most of the soil is made up of rocks like these that have been weathered and crushed. That is why most of the soil looks very grey and red. In this panoramic video, you can see the red soils from the volcanic rocks. You also can see Mt. Erebus in the background, puffing away! (The golf-ball looking things house satellites and other scientific equipment.)

There are other neat geological features besides the volcano. Sometimes rock formations will poke out of the ice sheet that covers part of Ross Island. Yesterday Katie and I hiked out to one of those formations called Castle Rock. I took another panoramic video along the way. Most of what you see is snow and ice, but you also see several rock outcrops and hilltops sticking out. Castle Rock is the formation just in front of Mt. Erebus at the beginning (and end) of the video. It looks very small compared to the large volcano, but that's only because we were still very far away when I took the video.
When you get closer to Castle Rock, you see that it's actually quite tall and cool looking! You can see different layers and lots of evidence of weathering. It's something you might expect to see in the western US, not Antarctica! 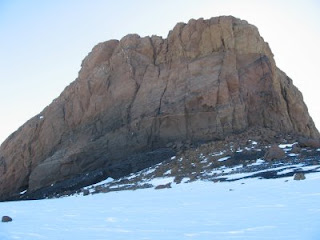 The hike out to Castle Rock was a nice break for Katie and I. Here we are enjoying my Uncle Ev's World Famous Buffalo Chip Cookies next to the emergency hut (nicknamed the "apple") on the hike: 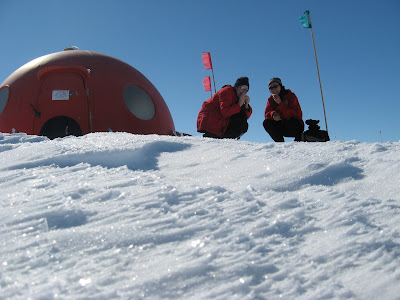 Elizabeth has made it in to McMurdo! Here flight landed yesterday evening. Now she has to catch up on all of her trainings so that we can head to the field soon!