As I mentioned in my last post, I'll be studying water tracks this coming field season. Because water tracks are fed by melting ice, they don't always have a lot of water flowing in them (and perhaps none at all at some points in time). That means that one day, we'll be at a site without  any sign of a water track, but then it'll appear later, then disappear again.

The time lapse video was put together by one of my collaborators, who positioned a camera and set it to take a photo at regular intervals. When you patch those together in order, you get the time lapse video. So, you also see the movement of the sun, which casts a darker shadow later in the day when the sun is behind the mountains. You can see the change in the weather, with some cloudy days and some sunny days. You can even catch a snow storm towards the end of the video in December!

In the next time lapse video, you can see water tracks appear on the mountain sides above Lake Bonney: They don't show up until later in the video, but they're very noticeable when they do! They'll be on the left side of the screen, and you can watch that downhill movement of water from the melting of ice higher up in the mountain. Remember, the video covers December through January, so it took a while for the water to move that distance. The water moves like an underground stream, but not quite as fast as a surface stream!

Water tracks: the focus for season 5

I am beginning preparations for my fifth season on the ice! This year I will be working with a team of geologists studying features called water tracks.

Water tracks are sort of like underground streams. A water track is a band of shallow groundwater seeping through soils, moving downhill, but without any flow on the surface. Instead of flowing on the surface, the water is flowing through the active layer (which is what we call the top layer of soil above the permafrost where biology and chemistry can be active). That means we don't see flowing water on the surface. We just see wet soil. Here is a photo of a water track from January 2009. See how the wet soil is darker than the surrounding, dry soil? 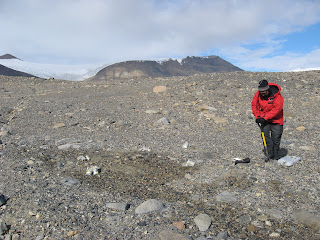 The water comes from melting ice. Water tracks are fed by melting glaciers, permafrost, and snow. That water percolates through the soil down until it hits the permafrost. It can't go deeper, so it starts moving downhill through the soil. Because ice melt is what feeds water tracks, we see more water tracks appear during extraordinarily warm summers.

One water track that reappears every time we have a warm summer is lovingly called Wormherder Creek. (It's named after the nickname for our research group, the Wormherders.) Here's a panorama I took of Wormherder Creek a couple years ago. You can see that the water track starts uphill and continues all the way down to the lake. With this particular water track, water sometimes also flows above the surface (when the melt water is coming in large volumes), which is why it's called a "creek".


We want to know how the appearance of water tracks changes the soil chemistry and biology, and what that means for the ecosystem as a whole. As you might be able to guess from the video of Wormherder Creek, when water moves through the soil, it makes it wetter, but it also carries along salts and other solutes to new locations. All of the stuff dissolved in the melting water is moving through the soil (to eventually be dumped into Lake Bonney below), and that can influence the behavior of the organisms living in the soil (like bacteria and nematodes).

For the organisms living in the soil, all of that extra water could be very stimulating! Organisms living in the soil are limited by water, because the McMurdo Dry Valleys are a desert. When you add water to desert soil, it could stimulate the microbes and invertebrates to be more active. However, along with the water comes a lot of salt, which could be very harmful to the biology. (Think about what would happen if you dropped a freshwater fish into the salty ocean. It can't survive! The same thing happens to soil organisms when their environment suddenly becomes saltier.) We don't know yet how soil biology, overall, respond to water tracks. Is the need for water in the desert a more powerful influence than the harmful influence of salt? That's exactly what our research this season will tell us!

I will be leaving for the Ice in mid-December to begin measuring the biological response to water tracks. In the meantime, I've been getting my equipment ready and sending it on its way to McMurdo Station. It takes a lot longer for the equipment to get to Antarctica than it will take me, so it has to have a head start.
Posted by Dr. Becky No comments: