We are currently waiting for our transport to Pegasus Airfield to catch our flight back to Christchurch, New Zealand. We woke up this morning to low clouds and snow, so we are concerned that we will have one more weather delay to our field season!

Since weather has had such a big influence on our field season this year, I thought it would be appropriate to blog about some of the neat weather-related sites we've seen this year. 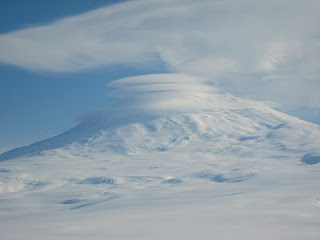 This is a cloud formation we saw when we were trying to fly to Cape Crozier. Mt. Erebus is the southern-most active volcano in the world, and it sits on Ross Island, overlooking McMurdo Station. Flying to the penguin rookeries on Ross Island has taken us in a circle around Mt. Erebus. The first time we tried to fly to Cape Crozier, it was very windy! These lenticular clouds form at high altitudes when winds moving over a mountain circulate on the downwind side. If the temperature is cold enough, moisture in the air condenses and forms clouds. They are aligned perpendicularly with the wind and form a lens shape, hence the name "lenticular". Pilots tend to avoid lenticular clouds, because when they form, you know there is wind and turbulence! 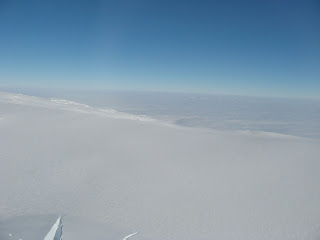 When we finally made it to Cape Crozier, the weather was nice. By the end of the day, however, a cloud system had moved in to cover Ross Island. When that cloud cover sits very low to the ground, it's called a "low ceiling" because the cloud cover is so dense, it's like having a roof over your head. Above the cloud layer, helicopters can fly, because pilots can see in front of them. But, they can't fly through a ceiling, because all they would see is white (and it's dangerous when your pilot can't see in front of him!). If the ceiling isn't too low, pilots can also fly under it. That was the case when we were at Crozier. We could fly above or below the ceiling, just not through it. Luckily for us, our pilot found a "window", or a break in the ceiling, to get us out of Crozier and above the ceiling. We flew at a higher altitude over the island, where we could see over the clouds. So you can see the ice covering the base of Mt. Erebus at higher altitude, and the low ceiling surrounding it. McMurdo Station is below that ceiling! Luckily, our pilot found a hole in the ceiling on the other side of the island that got us back below the ceiling so we could land at McMurdo. This is what it looked like as we were dropping back below the ceiling. Cloud ceiling above our heads, low-elevation coastal Ross Island below. 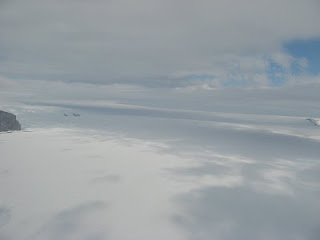 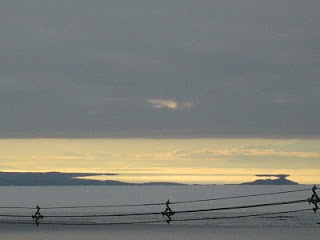 This is the view we had last night from our lounge window that looks out over the Ross Sea. The mirage is the mirror image of the mountains hovering just above them! This happens when the air is very pure and dry and there's virtually no wind, like last night. There also needs to be a strong difference in air and ground temperature. Light refraction in cold, dense air causes the reflection to occur in the clouds. The mirage we saw moved throughout the evening. Sometimes the reflection was low, so that the actual mountains and reflection melded together, but they would separate again like you see here.

The same weather system that brought us those mirages are what brought us snow this morning, and we're concerned will keep us from leaving for Christchurch today! We are supposed to transport to the airfield in just a couple hours, so we hope the plane will be able to land and take us back north. Keep your fingers crossed!
Posted by Dr. Becky No comments: