Today Mike and I hiked up another elevation transect to measure changes in soil chemistry with increasing elevation. So we are very tired again! We crossed some snow drifts that had very pretty patterns in the surface: 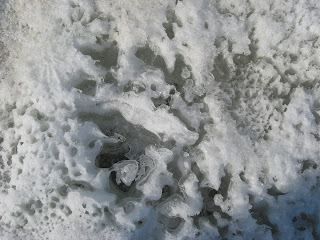 Another project we are doing in this area is testing whether adding nutrients to the soil affects the microbes and animals living there. Carbon, nitrogen, and phosphorus are very important nutrients for most living things. These nutrients move through the soil very slowly here, because it is so cold and dry. We want to know what will happen if there are more of these nutrients in the soil to be used by organisms. So, last year we added carbon, nitrogen, and phosphorus to different plots of soil. Now, a year later, Mike and I measured how much carbon dioxide is being produced by the living things in those plots. Just like with people, when the microscopic organisms in the soil breathe, carbon dioxide is produced. If there is more carbon dioxide produced when nutrients have been added, we know they are breathing more. They would breathe more if they're more active. The same happens with people. If you eat a good, nutritious meal, you'll be more active. You might run or play more. Getting that extra exercise makes you breathe harder and let out more carbon dioxide. That's exactly what we're doing for the soil organisms by giving them extra nutrients! We can find out which nutrients they need most by adding them to soil separately and measuring which nutrient makes them breathe the most. Today we measured carbon dioxide from each of the plots with different nutrients. Later in the field season, we will also look at the soil and what's living in it. We have to wait until the group for arrives before we can do that, since they work with us on the project. 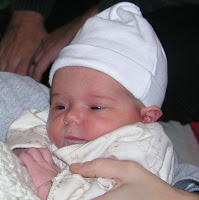