Following the footsteps of Shackleton

Antarctica is the most remote continent on the planet, but people have been coming here for over 200 years. The earliest visitors were whalers who set up stations at some of the sub-Antarctic islands and sailed their ships through the Antarctic waters to hunt whales. Then, explorers started visiting the continent in various attempts to discover new lands, make scientific discoveries, and earn the glory of being the first to reach the South Pole. There are some amazing stories about the adventure and hardships faced by these early explorers!

One of those famous explorers is Ernest Shackleton. He made several attempts to reach the South Pole, and one of those was from here on the Peninsula. His team attempted to sail as far south as they could in the Weddell Sea, and then trek south across ice and land to reach the South Pole. However, their boat became trapped in ice, was crushed, and slowly sank. The had plenty of time to abandon the ship and grab the gear they wanted and were living on the ice shelf over the Weddell Seal. When their boat finally sank, they had to haul all of their gear across the frozen ice to find help. They didn’t have pack animals, so this was all done by man-hauling. They man-hauled all of the food, gear, and three life boats! They walked as far as they could before the ice started breaking up, which left them on Elephant Island. There, they fixed up one of their life boats (a boat named the James Caird) using parts from a second life boat. A few of the men, including Shackleton, sailed in the small, repaired life boat in the open seas all the way to South Georgia Island where there was a whaling station, which helped them arrange rescue from mainland Chile. The third life boat was flipped upside down to make a shelter for the men remaining on Elephant Island until a ship from Chile came to get them over a year later. The men spent four months on Elephant Island, surviving in an overturned boat. Amazingly, everyone survived!

As you know from my last blog post, Elephant Island is one of our sampling sites. We had a chance to visit the site where the men built their camp 100 years ago while waiting for rescue. There isn’t anything remaining from that adventure except a statue that the Chileans built to honor the captain of the Chilean ship that eventually rescued them. 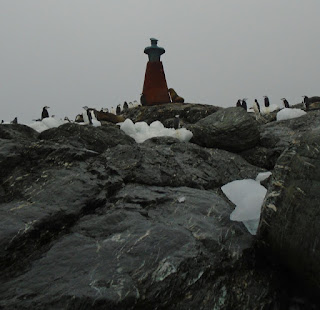 It’s a very dramatic site, but rather bleak in comparison to the other areas we’ve visited. It’s very rocky without much vegetation (but there were a lot of chinstrap penguins and fur seals!).  Plus, we were there on a very foggy day which added to the mysterious feeling. I sure wouldn’t want to spend two winters living there! 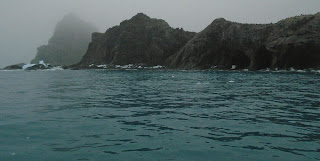 It was very special to be able to see a site with so much historical significance. It’s always amazing to think about how they handled the crazy and unpredictable conditions in Antarctica without all of the modern technology that we use to travel here. So much has changed in 100 years (yet in other ways, much is still the same).
Posted by Dr. Becky No comments: