A Beautiful Day to be in Norway

We took a break today from working on research projects to go for a hike just over the border in Norway. We stopped for a quick photo op at the border. The group is split between Norway and Finland: Antero, the research station director, was our guide for this hike since it’s a spot he found and knows well. Most of the trip involved walking along a road built during WWII by Russian prisoners of war. (Because Finland had at that time only recently declared independence from Russian rule, they initially allied with the Germans after Russia invaded at the start of WWII to defend their own independence. So it was German soldiers that made the POWs build the road, though later Finland and Russia would work together to remove the Germans before the war ended.) Here we are stopped on the road hearing an ecology lesson from Antero: 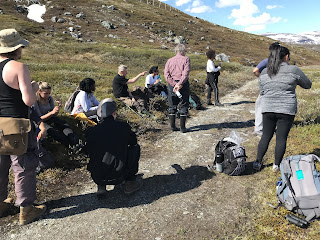 Once we got to Antero’s favorite spot, we rested on the banks of the pond, ate the lunches we packed, and enjoyed ourselves exploring and observing. It was a warm day, so we saw a lot of birds, bees, even some frogs at their northernmost range limit! Unfortunately we also saw some mosquitoes, but they’re not too bad, especially compared to most places in the Arctic.

Tomorrow it’s back to the grindstone working on research projects. I also think there will be a lot of sound and film editing, because students captured a lot of footage for their art/communication projects on the past couple of hikes we’ve done.
Posted by Dr. Becky No comments: