Antarctica has a long history of exploration. Explorers, mainly from Europe, were frequently coming to Antarctica during the late 1800's and early 1900's during what is called the "Heroic Age of Exploration". The goals of the explorations were mainly scientific. They wanted to study the geography of Antarctica and reach the South Pole. This was a very difficult time to be an Old Antarctic Explorer. Resources were scarce down here, working conditions were strenuous, and of course the weather was harsh! Explorations tended to be a feat of endurance, both physically and mentally. A lot of people died during expeditions to explore Antarctica and reach the South Pole. 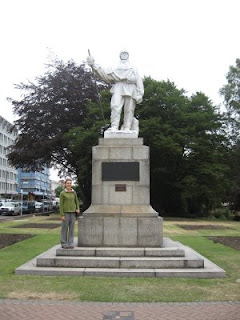 One particular OAE that is important in the McMurdo area is Robert F. Scott. He led several missions to this area of Antarctica. After exploring a lot of this region, Scott led a party in an attempt to reach the South Pole. He was racing the Norwegian explorer, Amundsen, to be the first to reach the South Pole. Unfortunately, the trip did not go well for Scott. They did reach the South Pole, but they were beaten there by Amundsen's party. And, on the journey back to the coast (here at McMurdo), everyone in Scott's party died due to the harsh conditions. Surprisingly, they were only 11 miles away from a supply hut when they died. It is a very unfortunate story!
A statue of Scott is in Christchurch, NZ. We always visit it on our way down to the ice. Here's Katie with the statue, back in December when we were passing through.

A lot still remains of the early explorations. Near McMurdo, there is a hut that was built in 1902 by Scott during his first mission, called the Discovery Mission. The hut is called (cleverly) Discovery Hut, and sits on Hut Point just outside of McMurdo. Several huts like this were built around Antarctica to be supply stations for explorers along various points on their journey. It is Discovery Hut that Scott's South Pole party was trying to reach when they died. 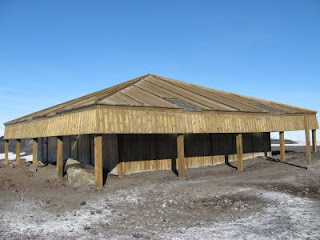 Because Antarctica is so cold and dry, these huts are very well preserved. The food and equipment that explorers used are still in the huts. We were lucky enough this year to be able to go inside Discovery Hut and see what's in there! Here's a video I took walking through the hut. You can hear Breana telling some facts about the hut and Katie asking questions. It's neat to see all of the old supplies, like what kind of food they eat and clothes they wore!

Some of the facts Breana is reading:
These huts were built in Australia, fashioned after Aboriginal huts that were designed to keep cool during the hot summers. Scott thought that it would work the same for keeping warm in cold Antarctica. But, he was wrong! The building was not warm enough for people to live in, so it was used for storage and cooking. Instead, the people lived on the boat just offshore. They heated the building with a blubber stove. That's the brick structure in the floor towards the end of the video. You can sort of see the huge chunk of freeze-dried whale blubber behind Uffe at the beginning of the tour (it's in a shadow, so hard to notice).

It was pretty neat to be able to see this little piece of Antarctic history. It's amazing to think about the conditions that the early explorers had to deal with. They're the same type of conditions we deal with here, but we're much better equipped now!
Posted by Dr. Becky 1 comment:

Our field season at McMurdo is starting to wind down. Ross is leaving today to head back to the U.S. Katie, Elizabeth and I are here just one more week to finish up our work. We are scheduled to head back to New Zealand on February 2.

We have just two more days of field work left for this coming week. Other than that, we are processing the last of our samples and breaking down the lab. We are cleaning out the lab, returning field gear, and gathering up our shipments to send home. All of the soil and moss samples we've collected over the season are getting boxed up to ship back to Dartmouth. We will have a lot more work to do with them once we return home.

It will be a busy week!
Posted by Dr. Becky No comments: