After 4 days at station working in the lab, we were supposed to be going back to the field today. But we have yet another bad-weather day that won't allow us to fly! So this is a good time to blog about weather in McMurdo.

We are in a polar desert. That means that there is very little precipitation, just like deserts in the U.S. But this is a polar desert, which means it is very cold, not hot like deserts in the U.S. We do get storms here, but they are mostly made up of wind and clouds and involve only a little bit of precipitation. The little bit of precipitation we get comes as snow, and most of it returns to the air before it melts into liquid water on the ground (that's called sublimation). So, it occasionally snows in the dry valleys, but when it does, it usually only looks like this for a few hours before it disappears. 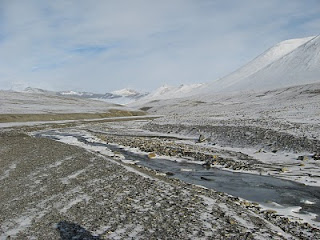 Right now, we have a snow system over us. In this radar image, you can see where I am right now at McMurdo Station (at the "You Are Here" arrow). There's a big bunch of clouds right over us and the dry valleys where we're trying to go! 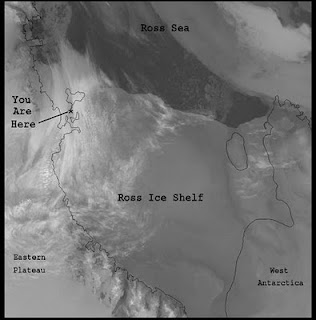 There's not a whole lot of snow coming down. There's just a dusting on the ground, but it really restricts visibility, especially over the ice. Here is a picture looking out of our lab window across McMurdo Sound on a normal, sunny day. You can see all the way across the ice to the Trans-Antarctic Mountains and the dry valleys where we do our research. 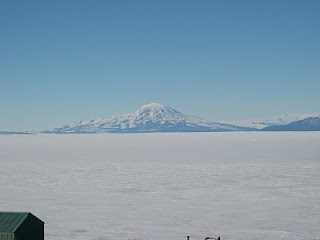 And here's a view out of our window today. 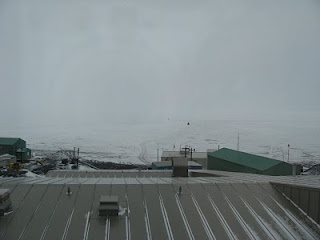 You can't see very far! And since the ice is white and the view ahead is white, helicopter pilots can't see the difference between the ground and the sky, which makes it unsafe to fly. We've had more snow than usual this summer. I've heard from people here earlier than me this spring that at one point there were eight inches of snow on the ground in the dry valleys! That means there's more moisture on the ground from the little bit of the snow that melts, and the soils are wetter than normal. Since the soils are so water-limited, that can change a lot!

Though it's too dangerous to fly, and it's cold and there are snow flurries, it is still not truly bad weather. This area can get far worse storms that include really strong winds and white-out conditions. The strongest and most dangerous type of weather is called a "herbie". Herbies are very strong windstorms coming from the south that bring along a lot of blown snow and very cold wind chills. They can come without much warning, and people will suddenly find themselves with no visibility and dangerously low temperatures. Luckily, they are not very common, and I haven't been here for a herbie yet. I have been here for a different type of windstorm called a katabatic wind. This occurs when cold air from the south gets pushed up higher in elevation to go over a mountain (like the Trans-Antarctic Mountains). Normally, cold air sits lower on the ground and warm air rises higher, because warm air is less dense. When cold air gets forced higher due to a mountain, it'll eventually reach the top of the mountain and then rush back down to the ground on the other side. It rushes down because it gets pushed down by the warm air waiting for it on the other side and squeezed into a smaller space of a valley. This can cause huge, fast gusts of wind that rush down the valleys where we work. We've seen tents be blown away before, and at times entire buildings have been blown apart. These happen most in the winter when there is a lot of cold air coming from the south, but there are occasionally katabatics in the summers, too.

To manage safety during these different types of weather, we use a rating system that restricts activity for people on base. Condition 3 means the weather is fine, and people can move about normally. Condition 2 means stronger winds and colder temperatures, and you have to receive permission to leave the base. Condition 1 means the weather has gotten really bad, and you're not allowed to leave the building or vehicle that you're currently in. So if it turns to Condition 1, you'd better hope you're in the Galley so you can have something to eat while you wait! We can find out what Condition we're in using these electronic notices posted around station, as well as colored lights that are mounted on the outside of the buildings. 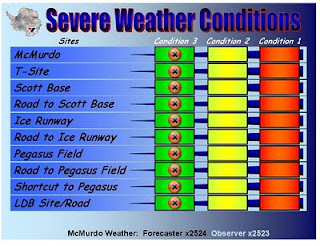 Even though the weather right now is bad and it's snowing, it's still Condition 3. We can move around base, we just can't fly. Our weather service on base is predicting snow for the next several days, so it's not looking good to get back into the field!
Posted by Dr. Becky 2 comments: