What do we do with the samples we ship home?

While we were in Antarctica earlier this year, we were able to do some of the analyses we need to measure on the soil we collected. However, we don't have the time or equipment to do everything we need, so all of our samples were boxed up and shipped back to Arizona.

I flew home on an airplane in mid-January, but my samples stayed at Rothera until one of the U.S. research vessels came to pick them up. The samples traveled by boat to the U.S. research station, then eventually on to Chile. From there, they were carefully packaged and flown to California. From there, they were carried on a truck to my lab at Arizona State University. I received many boxes that looked like this! 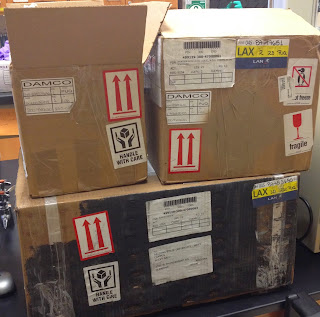 The soil samples were packaged with a lot of cryogenic material so that they remained frozen throughout the whole trip. They were immediately put into a -20°C freezer in my lab. Here are the samples, finally home-sweet-home! 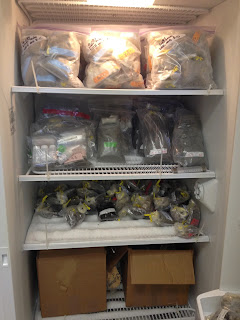 Now that the samples have arrived, we are able to finish our analyses on the soil. It will take a long time to get through everything we need to measure, but we've already made good headway! Most of these analyses are being done by one of my students, Connor. The first analysis he's conducting measures the mineral forms of nitrogen in the soil. "Mineral forms" of nitrogen include ammonium (NH4+), nitrate (NO3-) and nitrite (NO2-). We want to know how much mineral nitrogen is in the soil, because those are the nitrogen compounds that plants and animals are able to consume. Here are some photos of Connor working hard in the lab to extract soils for nitrogen:


Posted by Dr. Becky No comments: