Animals Under Our Feet 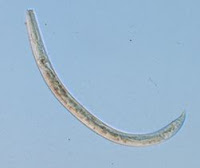 Nematodes are round worms. They are microscopic, and live in all types of habitats. Here, there are only 3 main species that we can find on Antarctica. They can dry themselves out so that they can survive during the cold, dry, dark times on Antarctica, and come back to life when conditions are better (except they were never actually dead, just preserving themselves). The 3 species here eat different things. One eats microbes. Another eats other animals (microscopic animals, of course), making him a predator! That is the top of the Dry Valley food chain: a microscopic nematode!

Tardigrades are a group of animals called "water bears" because they sort of look like 6-legged bears that live in the small amounts of water in soils. Aren't they cute? Water Bears eat microbes, algae, and are also sometimes predators.

Collembola are also called  "springtails" because they have tail-like appendages that are used for jumping. They mostly eat fungi, but not much is known about what they do in Antarctic soil.

So, as you can see, there are a variety of different types of animals living in the soil here. There's more than just penguins and seals that everyone knows about when they think of Antarctica! And these microscopic soil animals are very important, because they help process those nutrients that we've been studying! We focus mainly on nematodes, because they are the coolest animals down here! 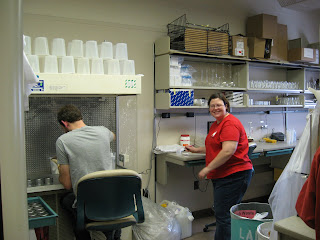 Then, they give the soil to Diana, who puts them in a sieve and runs water over them. This rinses away most of the soil, so that you have only nematodes floating in water. 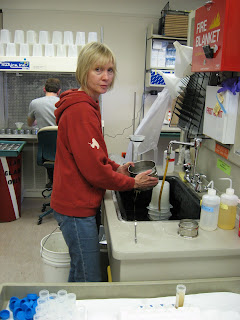 Then, Byron gets the sample. He tries to separate the nematodes from the water so that it is easier to see the nematodes under a microscope. Byron, however, lost his luggage when flying down to Antarctica. So, he's wearing clothes from the lost-and-found that we decorated to look like a bee. Here, it's not called lost-and-found, though. It's called the Skua Bin, because skuas are scavenger sea birds. 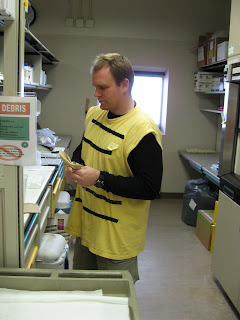 The nematodes will sit in the refrigerator until later, when we look at them under the microscope to identify and count them. Hopefully I'll get some pictures of the nematodes to show you!
Posted by Dr. Becky No comments:

We've been working hard in the lab. We're processing our samples that we collected in the field from the elevation transects. The samples have to be sieved to remove the rocks, so that we have just the soil left over. On the soil, we measure pH, conductivity (the amount of ions in the soil that move a current), and the amount of nutrients. These things that we measure help tell us how good of a habitat for organisms the soil is at each of the spots we sampled.

Ross wears his fancy tie-dyed lab coat with his best friend Einstein in his pocket: 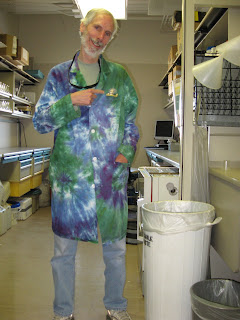 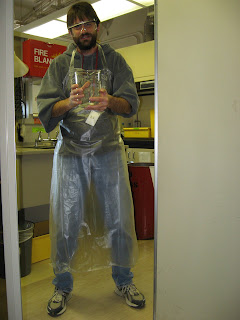 The other team we work with from Colorado State arrived yesterday! Now, we are joined in the lab by Diana, Breana, Ed, and Byron.
Posted by Dr. Becky No comments: