Finally in the Field

We finally made it out to our first field site in the Dry Valleys. We were supposed to have left yesterday, but the weather was too bad for the helicopters to fly. Today, though, the weather was decent enough to get us out in the morning, and here we are in Taylor Valley! 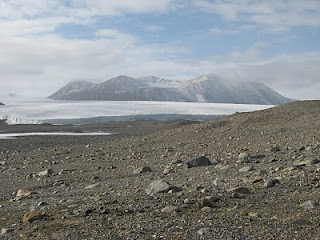 We do our field work in the dry valleys. These are the valleys in the Trans-Antarctic Mountains that dissect the continent. The presence of the mountains prevent the ice sheet from moving into the valleys, so they are de-glaciated. It is a desert, so there is not enough snow to maintain ice cover on the ground. There is only about 2% of the continent that is not covered in ice, and the dry valleys are a large part of that 2%. Here is a map of the main area of the McMurdo Dry Valleys: 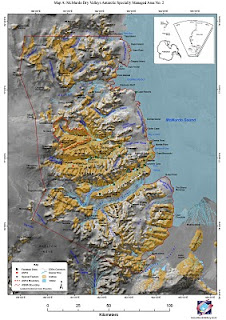 We do most of our work in Taylor Valley. There are three lakes in Taylor Valley, and right now we are on the eastern-most lake, Lake Fryxell, at F-6 Camp. The lakes are covered in an ice cap, but there is liquid water beneath it. That thin strip of white coming in from the left side of the photo is part of Lake Fryxell. These lakes are fed by glacial meltwater streams. That's Commonwealth Glacier in the background, and there are several streams from it that flow into Fryxell. So, there is liquid water in the dry valleys, but only in certain places. If you're not near a lake, stream, or glacier, there's not a lot of water for you to use.

Since we're a day behind, we immediately started doing field work when we were dropped off by the helicopter. So, I'm pretty worn out and it's late at night. I'll blog more about what we're working on tomorrow, after I've had some rest!
Posted by Dr. Becky No comments: