There are a lot of reasons that working in Antarctica can be dangerous. It's cold, windy, and very isolated. One danger that is not as obvious is Ultra-Violet radiation (called "UV" radiation). 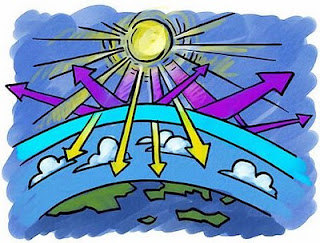 UV radiation comes from the sun. The sun naturally puts out a lot of different types of radiation. Some of that radiation we can see as visible light and colors. Some of the radiation we can't see, like UV. Radiation from the sun also carries energy. Some of this energy is very useful. It allows us to see, plants use it to photosynthesize, and much more! But some types of UV radiation are packed with so much energy that it can be dangerous if we are exposed to too much.


Luckily for us on Earth, there is a layer of ozone surrounding us in the atmosphere. Ozone is a molecule made up of three oxygen atoms (written O3), and it can bounce back harmful UV radiation and prevent most of it from making it to the Earth's surface. That is why the ozone layer is so important. It helps protect the Earth (and everyone on it) from harmful UV radiation. You can see in the diagram that there's a lot of "rays" of radiation coming from the sun, and some of those are stopped at the ozone layer. Only the helpful parts can make it through.

I'm sure you've heard about the hole in the ozone layer. But how did it get there, and what does it mean?

Humans produce some chemicals that can break apart that O3 molecule. These are chemicals that are made for many useful day-to-day purposes, and we didn't know they broke apart ozone when we started using them. Some of the major chemicals involved are called CFC's (which stands for chlorofluorocarbons... but CFC is a lot easier to say!). CFC's were used in refrigerators and as a propellant in aerosol cans. We liked to use these chemicals because they are not toxic and very stable (meaning they keep their chemical structure for a long time). That made them easy to store for long periods of time and safe for people to use. They are also very light, which means they can float up through the air once they are released from the aerosol can or refrigerator. At first, we didn't know that they were harmful to ozone. But, as more and more people used CFC's, more and more were allowed to float freely around in the atmosphere, eventually rising high up enough to reach the ozone layer.

Here's what happens when a compound like a CFC is in the ozone layer. In the ozone layer, the CFC is exposed to the UV radiation that it had been previously protected from when it was beneath the ozone layer. The UV radiation, because it is packed with so much energy, can break off pieces of the CFC compound. A single chlorine atom breaks off of the CFC in this process. It is actually the chlorine that breaks apart the O3 ozone molecule. O3 gets broken apart and is no longer useful for absorbing UV radiation.
If you want to know more about how the reaction occurs in the atmosphere, click this image to make it bigger and read about it:

So why is there one hole in the ozone layer, instead of over the whole planet? Air in our atmosphere moves around. It circulates. (Just think of wind. The same thing happens higher up in the atmosphere.) What ends up happening is that a lot of the CFC's gather together at one spot in the atmosphere that happens to be over Antarctica. The CFC's get trapped down here because of the winds that circle the continent. Because Antarctica is dark for 6 months of the year, the CFC's can build up. As soon as spring arrives and sunlight reappears, the CFC's can be broken, the chlorines released, and the ozone is eaten up!

Here's a map of the bottom half of the globe. The blue/purple areas are where the ozone is almost gone during the summer. The green areas still have an ozone layer. You can see that the ozone hole is very big... bigger than Antarctica! 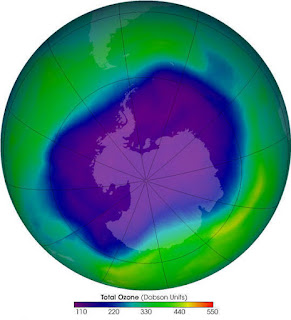 The ozone hole is not something you can see with our naked eye. The sky doesn't look different. But we see evidence that it is here. During the summer when the hole is present over Antarctica, we receive almost the full blast of UV radiation during the summer when the hole is present. People can easily get sunburn. Also, anything brightly colored fades pretty quickly here. A good example are the orange bags we are issued. In this photo from the airplane runway, you can see quite a variety of shades of orange bags. When they're new, the bags are bright orange and have black straps. Through time, the bags become lighter and lighter, and the straps turn gray. All of the bags in this photo at one point looked like the bright orange one under Liz's head (she's the girl lying down on the left). 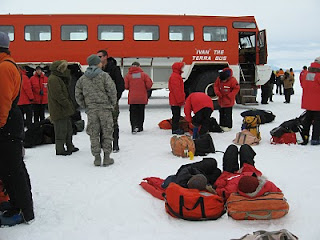 Of course, being under the ozone hole is bad for life in Antarctica. As people, we can take extra precautions. We wear a LOT of very strong sunblock. However, wildlife cannot. Scientists working here have noted harmful effects of the increased UV on marine life and other animals.

It's also not just bad for Antarctica. The ozone hole allows more UV radiation to enter over Antarctica, but that energy doesn't just stay around Antarctica. Like I already said, the air in our atmosphere moves around the planet. So extra incoming radiation over Antarctica means more radiation energy for other places on the planet, too. That extra energy can cause all sorts of changes, like increases in temperature, changes in wind patterns, and shifting ocean currents.

So the ozone hole is not just a problem for Antarctica! It is something that we all became concerned about, and we took action. An agreement was signed by many countries requiring them to make laws to reduce the use of ozone-destroying chemicals like CFC's. And it's working! These chemicals are decreasing in the atmosphere and the ozone hole is slowly repairing itself. But, it takes a lot of time to fix a problem that was caused in a very short period of time. Also, there are more than just CFC's that damage ozone. For example, N2O (nitrous oxide) is released from agricultural fields that are over-fertilized, and when N2O reaches the ozone, it also breaks apart into compounds that can break apart O3. So, getting rid of CFC's is a great first step, but we also have to start thinking about ways to reduce some of the other chemicals we release that can harm the ozone.