The weather has been very uncooperative for the past week and a half! It was hard getting everyone back into town after our field work last week, because the weather was bad and the helo's couldn't fly. Katie, Elizabeth, and Ross got stuck out at Lake Fryxell camp for an extra day because no helo could get into the Valley to pick them up. I kept trying to leave McMurdo to go to Lake Bonney, but that trip kept getting canceled. We finally made it to our destinations, after a couple days of delay. We all made it back to McMurdo on Tuesday, after completing most of the work we needed to do last week. Since then, we've all been back in McMurdo processing samples in the lab. Today, we are once again trying to get back to the field. We were all supposed to fly out this morning to F6 camp on Lake Fryxell. But, it's snowing again, and you can only see about 200 m across McMurdo Sound, so we're not going anywhere!

Since we're all stuck here in town, we decided to have a luau on the Florida Keys (after my walk to the post office to pick up some super fun packages that were sent to me). We decorated ourselves using my Luau in an Envelope kit. And we basked on the edge of the miniature beach that was sent to me from Florida (which I'm holding in my hands). Here we are partying in the hallway in the science building: Karen, Katie, Diana, Breana, Uffe, me, and Bishwo. Of course, we also decorate any passers-by, so now there's a lot of people in the science building in Antarctica that are dressed for a luau! 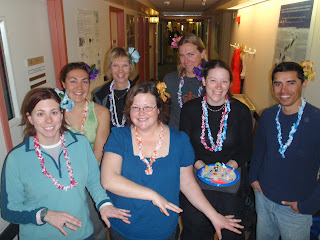 There's still a small chance we could get out to F6 later today. But the weather is not looking so good, which means we may be stuck in town until Monday. I'll keep you posted!
Posted by Dr. Becky No comments: