Preparing for the next field season

Usually, by this time of the year, I'm already on my way to Antarctica. This season, we're leaving for Antarctica a bit later than usual. We won't be heading down for our next field season until February of 2016. (That's usually when we're coming home!)

Even though we don't leave for another couple of months, we've still been busy preparing for the field season. I built some equipment that we'll need while we're in the field. You might remember from last season's photos that we built a make-shift contraption to extract small invertebrates from the soil: 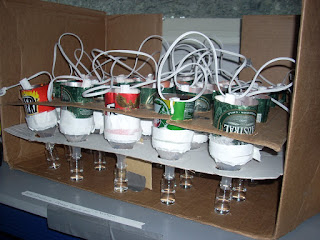 The heat from the light bulb causes the invertebrates to dig deeper into the soil, but instead of finding more soil, they fall into a funnel that drops them into our collection vial. At Rothera Station, we built one out of things we could find around the research station. We used cardboard boxes to make the stand, soda cans from the lounge, and gauze from the doctor's office. We added the funnels and Christmas lights that we packed, and it ended up looking like the picture you see above.

It worked pretty well! This year, we wanted to make two of them that were sturdier than cardboard. I constructed better versions out of plywood. You can see my progress part-way through the process: 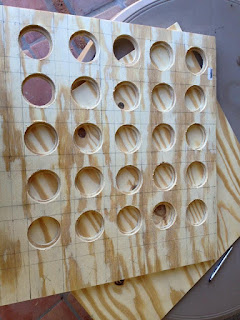 So, you can see that science isn't just about doing analyses in the lab. I get to practice my carpentry skills, too! I learned how to use a hole-saw so that I could make these frames. And my students drank a whole lot of soda so that we could have 50 cans to put into the holes!

Now, the newly-built extractors, and all of the other gear we need, has been packed up and shipped to Antarctica. It takes the slow route by boat, which is why it has to leave much earlier than we do. I won't see it again until I'm on the research vessel in Punta Arenas, Chile!