When Elizabeth and I were finally picked up on Friday from Lake Fryxell by the helicopter, the weather still wasn't great. Normally we fly from Taylor Valley by cutting across the frozen Ross Sea to McMurdo on Ross Island. But, we got to fly home with my favorite pilot Mike, who took us home the long way by going out along the sea ice edge. We got to go out to where the ice sheet covering the Ross Sea ends, and open (unfrozen) water begins. At the ice edge, the thick sea ice starts breaking apart into neat shapes. There are icebergs floating in the water, islands in the distance, and lots of animals! This is where the penguin colonies hang out when they're not sitting at the nest. There are also seals and whales around there, too! It was absolutely awesome to see! So, there a lot of pictures in this blog entry from Elizabeth and I. 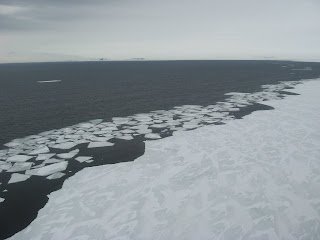 First, we saw lots of penguins. Most of them are Adelie penguins, but there were also some Emporer penguins. They hang out near the edge of the ice groups of hundreds. This is where they hunt for fish and krill, while the other parents are sitting on the nests back at the rookeries. You could see a group of penguins scattered at every corner in the ice. 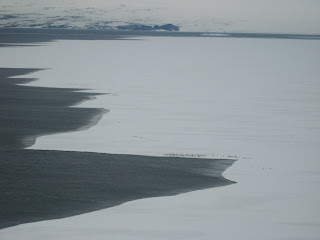 When the helicopter comes nearby, the penguins start to run away and jump into the water. That's what they were doing in the picture in yesterday's blog entry. They swim along the ice edge, leaping through the water. This picture looks kind of upside-down, but that's the sea ice on the bottom, ending in open water, with penguins on the left swimming through the water! 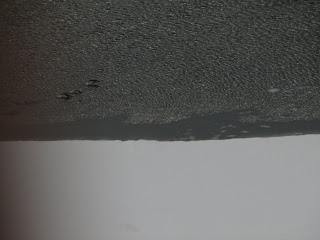 On the ice, we also saw Weddell Seals. They also hang out along the ice edge to more easily find fish for food. The seals can dive very deeply and stay underwater for very long times, but sometimes they come up to the ice to rest and warm themselves in the sun. They mostly hang out alone on a chunk of ice, so they were scattered across the ice edge. I don't think they were having much luck sunning themselves, since it was so cloudy! 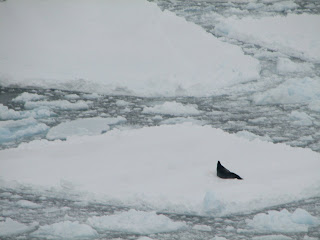 Then, we saw the whales. They were swimming through the water in groups, staying close to the ice edge where they could find food. We saw both Minke Whales and Orcas (Killer Whales). The orcas eat penguins and seals that are on the ice edge hunting for fish. They were staying close to the surface, since they were hunting, so we constantly saw them coming above the water. 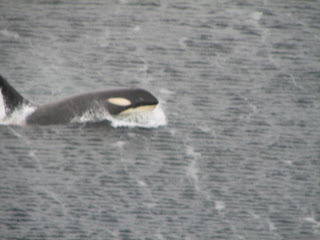 I also got a little bit of video of some Minke whales swimming through the water. You can see two of them coming above the water on the right side of the video.

So, we had a great flight back! It was just so beautiful and interesting! Here is a picture of my FAVORITE pilot, Mike, who took us for such a great adventure: 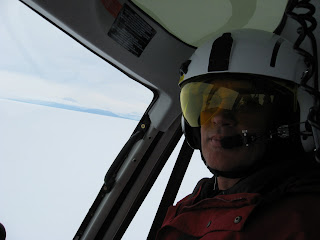